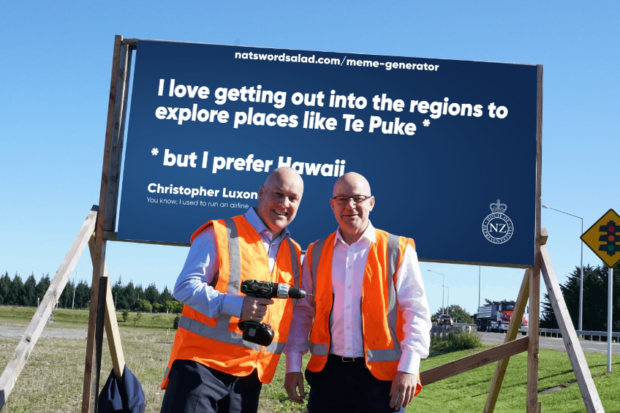 The question of what has happened to Christopher Luxon was answered yesterday in a shambolic messy way that must have National operatives in despair.

He was apparently in Hawaii for a holiday.  Which is fine.  John Key used to do this all the time without any political repercussions.

But there was a difference between Key and Luxon.

Key did not tell fibs suggesting that he was working when he was holidaying.

From Thomas Coughan at the Herald:

National Leader Christopher Luxon has admitted he was in Hawaii last week during Parliament’s winter recess – while posts on his Facebook page made it look as though he was visiting regional New Zealand.

The posts, on his official social media accounts, suggested Luxon was spending the recess connecting with parts of heartland New Zealand like Te Puke.

On July 21, a post on Luxon’s Facebook page showed him saying “provincial towns like Te Puke” were “the backbone of New Zealand” and discussing issues like skill shortages that were taking the region and the country backwards.

While the text of the post did not say Luxon was in Te Puke on that particular day, the video attached to the text said that Luxon was.

Instead, Luxon left that day for an overseas holiday with his family. He was actually in Te Puke a week earlier.

He initially denied that the posts were misleading.  By yesterday afternoon he admitted they should have been captioned differently “to make clear it was in recent days, not on the day”. He also said he didn’t personally make the posts, but took responsibility for them.

This is real amateur hour stuff.  Maybe the fuck up theory applies and this is just a comedy of errors, not an attempt by Luxon’s staff to fool most of us that he is out working hard in the provinces of New Zealand rather than sunning it up in Hawaii.

But the implications are clear.  Either or both propositions apply.  You cannot trust Luxon and he lives in a world entirely different than the world most of us live in.