Yesterday, 60 highly paid jobs at Rakon where lost and we learned 5,700 manufacturing jobs had been lost in the past year. The reason, the high dollar made manufacturing here untenable. Steve Joyce shrugged his shoulders and said it was the company’s call to do what made it profitable. Of course, it’s his government’s failures that are making going overseas the most profitable decision for Kiwi manufacturers.

We now have the lowest number of manufacturing jobs since the current statistical series began in 1989. 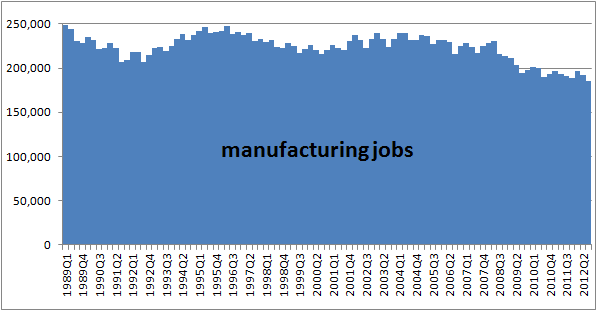 The scary thing is that Rakon’s job losses aren’t actually that extraordinary. Since June 2008, an average of 40 manufacturing jobs a workday have been lost. 5 an hour, every workhour, for 51 months – 45,600 all up.

So, still no crisis in manufacturing?

(and don’t the facts nicely puncture the myth that manufacturing has been in long-term decline in New Zealand? – in fact, the number of manufacturing jobs was within 20,000 either side of 225,000 for two decades until four years ago when it began to collapse and the collapse is continuing still)