Medical gender transition in New Zealand: How common is it really?

Guest Post by Laura López. Laura is the mother of two girls and holds a graduate degree in psychology. She writes about gender at Arguments With Friends on Substack. Comprehensive sources for the findings highlighted in this article can be found in Laura’s full-length report here.

Many New Zealanders now know that the UK’s gender clinic for children is being closed down (The Times) and sued for criminal negligence. A damning independent review by paediatrician Hillary Cass found that the clinic was “not a safe or viable long-term option” (PDF) for the treatment of gender questioning youth. The families harmed by the clinic say that patients were “rushed into taking life altering puberty blockers​ without adequate consideration or proper diagnosis”, resulting in “physical and psychological permanent scarring”.

Is the practice of gender medicine in New Zealand better or worse than the appalling situation Dr Cass discovered in the UK? Some people claim that New Zealand has taken a more conservative approach to medical gender transition than our international peers. Others dispute this, claiming that New Zealand has been particularly incautious (PDF). Our mainstream media seem reluctant to provide balanced or critical reporting on transgender issues, making it difficult for people to know exactly what is happening in our country. 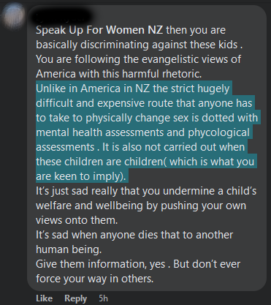 I decided to explore and analyse the available evidence on medical transition in New Zealand. What I found was shocking: 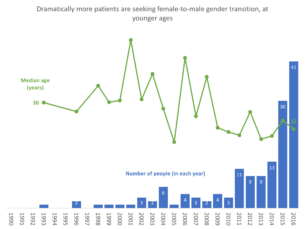 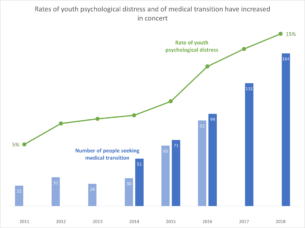 Percent of New Zealanders aged 15 to 24 reporting significant psychological distress, compared with the number of first appointments for ‘gender affirming care’ at Wellington Endocrine Service (WTN) and across Capital and Coast District Health Board as a whole (CCDHB). Based on data from multiple sources; see full report for details.

In short, the available evidence suggests that medical transition is even more poorly overseen here in New Zealand than it was until recently in the UK. One probable reason for this failure is the lack of critical media scrutiny of this area of medicine in Aotearoa.

As mentioned earlier, the UK government eventually took notice of public outcry, and organised an independent review of how their health system was managing the medical transition of children. We are in desperate need of a similar independent review in this country. I have every confidence that this will happen eventually. The scale of the damage to our children will one day be revealed to all New Zealanders.

Further information can be found in Laura’s full-length report.

40 comments on “Medical gender transition in New Zealand: How common is it really? ”