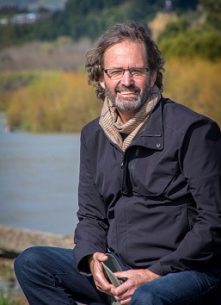 Massey University’s Dr Mike Joy has been awarded the inaugural Critic and Conscience of Society Award for his work on water quality in rivers and lakes.

The Critic and Conscience of Society Award, sponsored by the Gama Foundation, acknowledges academic staff who provide independent, expert commentary on issues that affect the New Zealand community and its future generations. The prize of $50,000 is earmarked to support his further research.

The independent judging panel noted how Joy, a senior lecturer in ecology and environmental science at Massey, had made a substantial contribution over the past two years to raise public awareness of an important issue facing the country.

“Mike’s work has successfully placed a complex and difficult environmental issue on the public agenda,” said panel member Professor Steve Weaver, of the University of Canterbury.

“He’s single-handedly raised awareness of an issue that’s at the heart of our country’s primary economy and environment.

“While some of his messages are unpalatable to some, Mike has been a fearless crusader to ensure this issue remains a top of the agenda for central and local government, as well as for the agricultural industry.”

Meanwhile, 100 water protectors occupied the Ecan building yesterday to urge restoration of democracy in Canterbury and restoration of healthy waterways.

Today, with about 100 people from Canterbury and further afield, we occupied the regional council building for the day.

We did it because our rivers are crashing, New Zealand has too many cows and because the National Government stole democracy from the people of Canterbury to make way for more big irrigation and more intensive dairying. Democratically elected regional councilors were sacked and replaced with Government appointed commissioners. Since then cow numbers have doubled. Our demand of all political parties: reduce the dairy herd, and return democracy to the people of Canterbury immediately.

Both Labour and the Greens committed to give Canterbury back a democratically elected regional council.

Absolutely! New constituencies needed that are fair & give equal weight across region. In our Canterbury policy https://t.co/RImUMKIJz4

Today we welcomed @GreenpeaceNZ peaceful protesters to our head office in Chch. We respect their views & have offered ☕️ #ECan #CanterburyNZ pic.twitter.com/BmbiQj65po

Good to see Peel Forest organic dairy farmer Bryan Clearwater being quoted in the media. These are the kinds of farmers we can get behind.

Among the protesters was Bryan Clearwater, a dairy farmer from South Canterbury.

He said the groundwater beneath his farm was polluted with nitrates, and clean water was pumped to his house by Fonterra.

“My colleagues in the dairy industry are not just receiving an environmental subsidy, we are receiving a public health subsidy as well.”

His farm had a low environmental footprint and did not add nitrogen to the soil. He received a premium for the organic milk his farm produced.

He said dairy farming in Canterbury needed to de-intensify, with a focus on soil management and lower stocking rates.

“I think farmers are a pretty diverse bunch. When the regulations are put in place as they need to be put in place, they will come up with different solutions.”