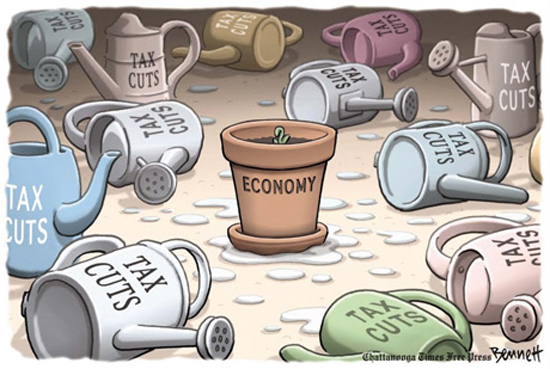 You know the right wing mantra that reduced taxes will bring nirvana to us all?

Well most kiwis disagree.  From Isaac Davidson at the Herald:

A majority of New Zealanders say they would support higher or new taxes to maintain funding for schools, hospitals and transport systems, according to polling by trade unions.

And despite the Government ruling out income tax rises, there appears to be public support for them – at least for the wealthiest earners.

The Council of Trade Unions (CTU) commissioned the polling by UMR to inform its submission to the Tax Working Group.

The working group’s recommendations will influence the Labour-led Government’s new tax policy, which it will take to the 2020 election.

The CTU’s polling on income taxes is notable because Government has already ruled them outside of the tax working group’s terms of reference.

Asked whether the union body wanted the Government to change that decision, CTU secretary Sam Huggard said income taxes “should still be part of the mix”.

“The working group has flexibility in terms of recommending further reviews,” he said.

“So if they were convinced with our argument they could recommend Government consider further reviews in this area.”

And the detail in the polling is fascinating:

A majority of people said top earners in New Zealand paid too little tax, and 66 per cent of people supported a fifth tax bracket for those earning well over $70,000.

The CTU, which represents 360,000 workers, wanted those earning more than two times the average wage to be taxed at 38c.

And the overwhelming majority of Kiwis prefer higher taxes so that we can fix up our failing infrastructure.

Nine out of ten of those polled said public services like hospitals, schools and transport needed more funding – a figure which surprised the union.

Two-thirds of them agreed that the Government should raise taxes to ensure that public services remained at the same level in future.

Huggard said it was “an inescapable fact” that Government would need to raise revenue in coming years to rebuild public services.

The polling showed that there was a public mood for raising more revenue and looking at a wider range of revenue beyond just company tax and income, he said.

That included removing tax on the first few thousand dollars of personal income – a move that was backed by 87 per cent of people.

Other popular alternatives were an environmental tax for companies which continued to produce pollution, or taxes on wealth, such an inheritance tax.

And the most radical tax proposal, introduction of a Tobin tax was remarkably popular with 37 % supporting the introduction on an automatic tax on every automatic financial tax and with 53% opposed.

Clearly kiwis want their government to function properly. And are prepared to fund it so that this occurs.