Mythbusting: Crime is down, not up

It’s hard to know why people keep interviewing Garth McVicar from Sensible Sentencing. The organisation has no credibility, no research every statement on policy is really just â€˜Garth guesses X’. And of course, they made those disgusting comments around the death of Pihema Cameron.

Nevertheless, he was on National Radio this morning regarding new stats showing the prison population has doubled since the 1980s. What did he attribute the growth in prison numbers to? ‘Our growing crime rate’.  That would be this growing crime rate, Garth? 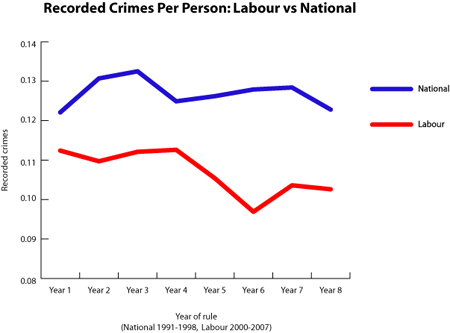 The prison muster is up due to a combination of larger population, longer sentences, and better crime fighting. Sensible Sentencing denies that and says it’s due to higher crime even though crime is down.

McVicar’s answer to his fictional problem is, of course, more Police State and more dead taggers.

67 comments on “Mythbusting: Crime is down, not up ”