In railing against Labour’s targeted assistance to low income families, ACT’s David Seymour showed us yet again the ugly side of tory politics:

"The fact is, parents who cannot afford to have children should not be having them." https://t.co/QmeuoQG3mp

OK then. Poor people shouldn’t be allowed to have kids. That probably sounds very familiar, and so it should, because the Nats have said similar things over the years. The dearly departed John Key “thought” (despite all the evidence to the contrary) that parents on the DPB were “breeding for a business”. And:

Bennett: No compulsory contraception for now

Social Development Minister Paula Bennett is “a big fan” of long acting contraception for solo mums but says her Government is “not quite” at the stage of making it compulsory. …

State may try to stop some families having more children

Some families who have come to the attention of authorities may be stopped from having more children by the Government.
…
Tolley acknowledged it would be a “huge step” for the state to start telling people that they could not have another child, but said it was “a conversation that New Zealanders, perhaps, need to have”.
…
Tolley did not rule out limiting or preventing some families from having another child, but said she would wait to see what the panel recommended in December. …

The Government is considering a range of hard-line measures to try and stop ‘unfit’ parents from having more children.
…
Paula Bennett says she and her colleagues have had enough and are putting together a White Paper on the issue.

Defining and controlling who is and isn’t entitled to have children is a very slippery slope indeed. Denying children to those deemed “too poor” is way down the slope and picking up speed towards eugenics. These are the kinds of attitudes that we need to vote out of office in September.

We already have too many children born into poverty. Paying people to bring children into the world will only make this worse. https://t.co/q4Bc4okx5w

Seymour gets a $189K salary thanks to a Nat handout.

Full credit to @LewSOS for this contribution: 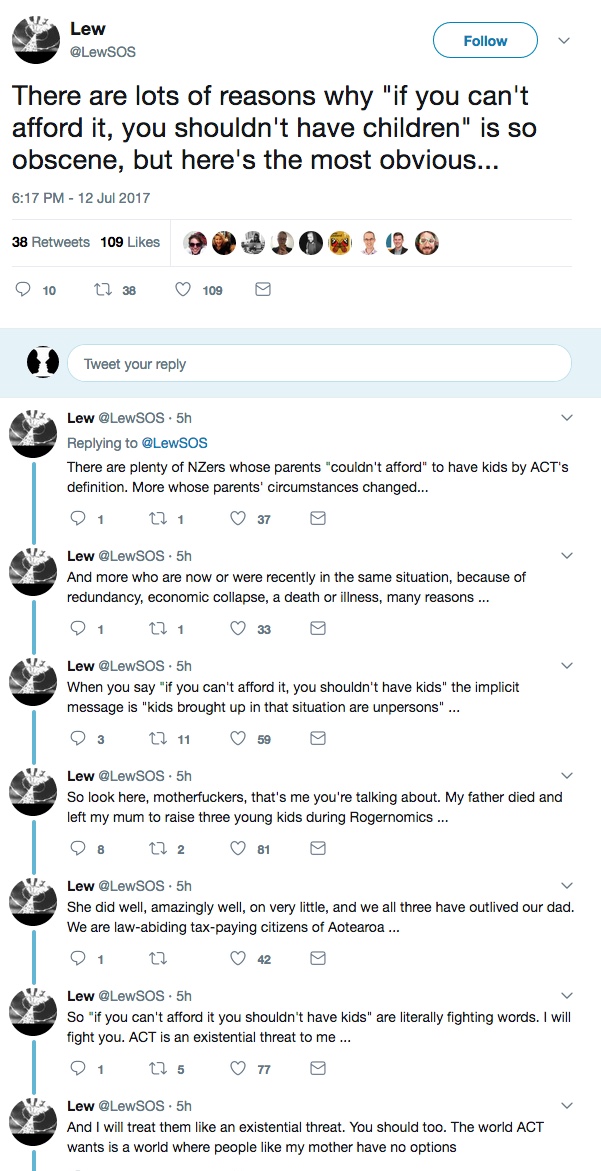