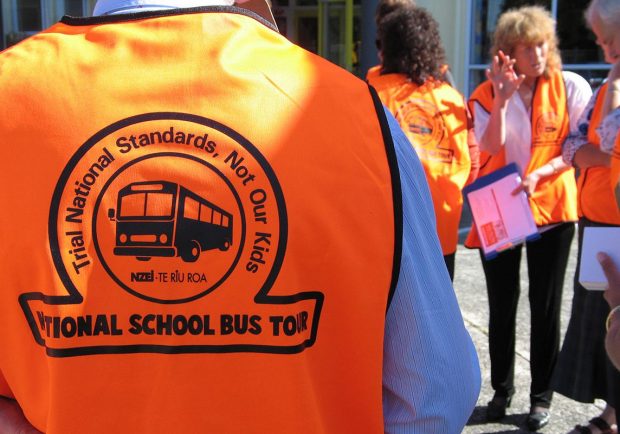 If you ask a Primary School teacher what has been the most retrograde step the last Government took in the education sector it would be National Standards.

It sounded great. Instant ranking of your kid amongst their peers so you would know if they were going to be a brain surgeon or a factory hand. Perfect opportunity for the anxious rich and middle class to make sure that their kids got ahead and if they were not getting ahead then things could be done to help.

But teachers hated it. They had to spend so much time testing and collating and inputting data. They had to deal with anxious parents who were upset their kids were not doing as well as they thought they should be doing, and kids who hated doing assessment after assessment. They complained because all this testing and assessing and data collection was stopping them from teaching which is actually the thing that teachers want to do.

They were really concerned that all this testing and assessing and stressing was affecting the quality of education their kids should have been getting. And they were right.

Teachers and principals are blaming the national standards in reading, writing and maths for a sudden drop in 10-year-olds’ scores in an international reading test.

For the past 15 years, New Zealand’s average score in the Progress in International Reading Literacy Study was static at about 530 points, but in the most recent round of testing it fell from 531 points to 523.

New Zealand’s ranking in the study also fell, from 23rd to 33rd out of 50 countries.

And from the coalface:

The president of the teacher union, the Educational Institute, Lynda Stuart said the standards were to blame because they took the joy out of many classes after they were introduced in 2010.

“The creativity has actually gone and we know that creativity helps children to learn within that literacy and numeracy area.”

“The profession has always been fearful that with the narrowing of the curriculum that we would see a slip,” he said.

“Many would argue that when you fixate on a particular area, kids are going to switch off and this is what has happened. Children are being relentlessly pushed in reading, writing and maths.”

And if you want a clear example showing how cynical the introduction of National Standards was then National’s early decisions when its last term of Government started provide plenty of evidence.

The Government was urged [in the 2008 Briefing to Incoming Ministers] to continue with professional development programs.  The Numeracy Development Project, established in 2000, had resulted in significant improvements. Between 2002 and 2007 the percentage of Year 6 students achieving at or above the expected level in mathematics increased from 40 percent to 61 percent while the percentage classified as at risk decreased from 30 percent to 13 percent.  The Literacy Strategy, also established in 2000, also saw significant improvements.  A 2008 evaluation showed that after taking into account expected growth and maturation, students’ gains in reading and writing were twice those that could be expected without the intervention and that schools accelerated the rate of progress for the majority of the at-risk students by four times the expected rate.

So what happened to the recommendations?  In Budget 2009 then Minister Ann Tolley gave private schools $35 million extra funding, announced the roll out of National Standards while at the same time cut funding for the literacy and numeracy projects despite their effectiveness. If she wanted to do something for literacy and numeracy she would have not done this.  She was looking to appease National Supporters and introduce testing for PR purposes at the cost of two quality programs.

With the benefit of hindsight it is clear that the concerns of the Public Service were totally justified.  And cutting quality programmes, giving the money to private schools and then foisting National Standards on us were the wrong things to do.

Of course National Standards may have not been the only cause.  Increasing child poverty no doubt also had an effect.

Thanks National for putting political gain ahead of what is best for our kids. Again.