National’s anti gang policies and the Bill of Rights 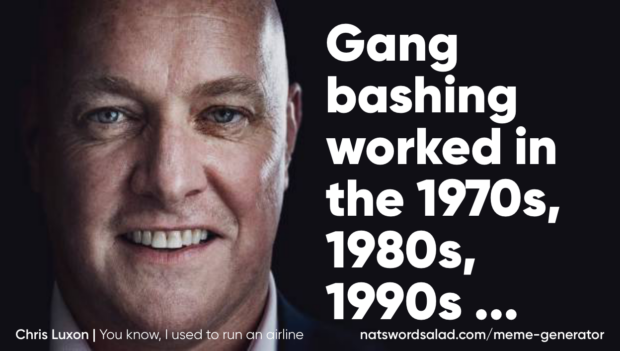 This weekend National threw out a few hunks of red meat to some of its more rabid supporters.  The recent series of drive by shootings have made it determined to do something.  None of the proposals will actually achieve anything but that is beside the point.

So what have they proposed?

Some of the details were given in this NZQ&A interview of Mark Mitchell.

You can see they are trotting out the same arguments.  Like the increase in gang numbers.  As stated by Jarrod Gilbert the statistics are shonky.  It is very easy to be added to the list and difficult to be taken off it. And the continuous addition of 501s exported from Australia has certainly buttressed figures.

The problem with the patch ban, dispersal notices and the association provisions are clear.  There are fundamental human rights at stake and the court system will look at the proposals if enacted carefully.

Mitchell was asked repeatedly how the proposals will stop drive by shootings.  He kept answer different questions and did not answer the question.

The absurdity of his position was captured perfectly in this question from Jack Tame:

So do you think that someone who is prepared to fire a military style rifle into someone else’s house in a drive by shooting is going to stop that because police have issued them with a notice saying “don’t hang out with your mates”.

Mitchell’s response made no sense:

What the police can do is stop them talking to each other and organising it.  That’s what they can do with a non consorting order.  They can’t do that at the moment.”

Mitchell was asked by Tame if the proposals were legal under the Bill of Rights.  The conversation went like this:

Mitchell: Gang members steam roll and trample over the rights of every day kiwis on a daily basis.  They put them in enormous harm.  They are discharging high powered military rifles through people’s homes.  And actually if they continue to act like that they are going to have to understand there may be some tough legislation which may impinge on some of their rights.  The best way that they can respond and react to that is quite simply this, leave the gang. And leave families out of the gang and rejoin society.

Tame: You would introduce laws that would impinge on the Bill of Rights?

Mitchell: Well we will have to wait and see but …

Tame: But that is what you just said.

Clearly in National’s world rights are only preserved for some people.

And you should contrast these proposals with what National said in response to the proposed Hate Speech laws where Simon Bridges said:

“The reforms are supposedly including protections to every ground listed in Section 21 of the Human Rights Act. That includes political belief.

“The definition of hate speech or incitement would include ‘the incitement of disharmony, based on an intent to stir up, maintain or normalise hatred, through threatening, abusive or insulting communications’.

“If these reforms pass, then insulting communications from a different political party could land you in jail.

“If we lose our liberal democracy we will end up with the type of New Zealand that the March 15 terrorist was trying to create.

“Freedom of speech in a democracy means having to tolerate the expression of diverse views, but there are some things like violent hate speech that are never acceptable.

The interview descended into absurdity when Mitchell refused to comment on how much extra resources for the police will be provided.

National’s proposals feel like the latest reheating of a particular course they have served up many, many times in the past.  The proposals are legally practically indefensible and if passed would be tested in the court almost as soon as you can say “paid mercenary”.

I suppose we should not be surprised.  But I hope the media dig deeper into the proposals and seek comment from people with actual experience in the area.