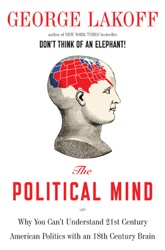 George Lakoff has a new book out.

You might remember him from such books as “Moral Politics” and “Don’t Think of an Elephant”.

These books largely dealt with what he termed “reframing” of political metaphors – using belief structures to which voters already subscribe as supports for arguments for progressive policies.

The NYT reviews his latest work, “The Political Mind”, here.

Lakoff blames ‘neoliberals’ and their ‘Old Enlightenment’ mentality for the Democratic Party’s weakness. They think they can win elections by citing facts and offering programs that serve voters’ interests. When they lose, they conclude that they need to move farther to the right, where the voters are.

This is all wrong, Lakoff explains. Neuroscience shows that pure facts are a myth and that self-interest is a conservative idea. In a ‘New Enlightenment,’ progressives will exploit these discoveries. They’ll present frames instead of raw facts. They’ll train the public to think less about self-interest and more about serving others. It’s not the platform that needs to be changed. It’s the voters.