None of this is remotely sustainable

I’m one of the fortunate people to have had a 70s childhood swimming in our local rivers. We freely drank out of the same rivers, didn’t think twice about that. We just took all that for granted, and rightly so. It should be the birthright of us all. This is how nature is supposed to be.

As a teen I remember reading about European rivers being so polluted people couldn’t swim in them, let alone drink from them, and thinking how could they be so stupid as to allow that to happen?

This week Stuff published a piece about Lake Waikare, aka Lake Fanta, This Is How It Ends: How producing milk turned a lake bright orange 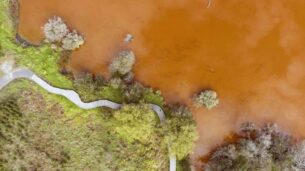 From Stuff in July,

Water in Waikato’s Lake Waikare is still dangerous to swallow or touch.

Symptoms of contact with or swallowing the water include rash, skin and eye irritation; allergy symptoms such as hayfever and asthma; and possible stomach upsets including diarrhoea and vomiting.

I was duly horrified, in a ‘wtaf New Zealand?’ kind of way, but then I discovered that this isn’t new. As far back as 2013, there are reports of algae overgrowth in Lake Waikare.

It’s so dirty, in fact, that the regional council says it is unlikely to ever be restored.

“I think it’s fair to say that part of the problem has crept up on us without us knowing – the problem is a blue green algae, which could put animals and humans at risk,” says Bill Vant of the Waikato Regional Council.

Seven months later, a report from Newshub on why the lake was turning orange (algae), and,

Mr Vant says a recent NIWA report on the Waikato River catchment for the Ministry for the Environment highlighted how there was no quick fix to these challenges.

Stuff, October 2020, reports on The Last Lake. Waikato lakes are some of the most polluted in the world, Lake Puketirini is the last lake in the Waikato area that isn’t polluted. A trucking company wants to dump millions of tonnes of industrial waste beside a stream that feeds Lake Puketirini.

If that isn’t the central, enduring story of Clean Green New Zealand, I don’t know what is.

Meanwhile, the Waikato District Council has been discharging sewerage into the lake for the past thirty years years, and the last three have been ‘non-compliant’ and despite being told by the Regional Council to stop. The sewerage treatment plant can’t cope with the town’s output due to rapid development. Who gave consent for the development I wonder.

Yeah, I can totally see how this crept up on them without them knowing.

Of all those things the only issue that isn’t on humans is the original shallow nature of the lake, and probably the wave action. The rest is the predictable outcome of human activity that is divorced from nature.

I cannot stress this enough: when we perceive ourselves as separate from nature, that nature is something over there that we should take care of (or not), this kind of damage is inevitable. Humans just don’t have the capacity to not do this, unless we place the environment at the centre of what we do and design everything else around that.

If river and lake quality was the baseline, and by quality I mean not just drinkable but healthy for all the life in and around the waterways, then all the things that we feed into that lake or river would have to be done sustainably.

Population would be controlled, new development would be paced according to the needs of the ecologies of the area, farming would be regenerative i.e. it would only be of the kind that restored the damage being done and enabled a system that maintained health in perpetuity. The lake edge ecologies would be largely restored to native, as would the river and stream catchments. Reforestation would be a high priority. The human waste systems wouldn’t be discharged into any water anywhere, but we would instead design systems that processed faces and urine into a usable resource. Industrial chemicals would be used far less, and usage would likewise be determined by where those chemical end up.

And all of that would be done in the context of the climate and ecology crisis solutions.

It’s no coincidence that Te Pāti Māori have the most progressive water policy of any party in parliament and that it is holistic and based in systems (the relationship between things),

te hauora o te tangata – the health and mauri of the people.

We also need to be mindful that the drinkable, swimmable, wadeable standard promoted by the mainstream political parties is not a high enough standard for most fresh water life. Seeing the connections yet?

What we do instead, is we push the limits as far as we can, to see what we can get away with, and we use retroactive policy making to try and limit the damage. We are failing miserably. The gains we make are neoliberal lilos, keeping us just afloat while species go extinct and dairying and development increases. We might be able to excuse people in the first half of the 20th centurty for their ignorance, but there is no excuse now. None. This is willful ignorance at best, and an utter failure in basic duty of care.

This story is the main narrative running through New Zealand society. None of what we do is even remotely sustainable. Sustainable in real terms means that ecological systems, be they native landscapes, or parks, farms, roadsides, lakes, rivers, or our own backyards, are able to be healthy and maintain themselves in that state in perpetuity. We can greenwash what we are doing, but we can’t pretend that we are getting this right. Sustainability only happens if we have healthy beginnings.

That’s New Zealand’s central, enduring story. We want to think we care, but we don’t. We vote in people that prioritise development over nature, and then we get angry at the farmers or the geese or anyone but ourselves at the mess that ensues.

But what if we told a different story? What would that story look like?

43 comments on “None of this is remotely sustainable ”