Northland by election – National gets desperate 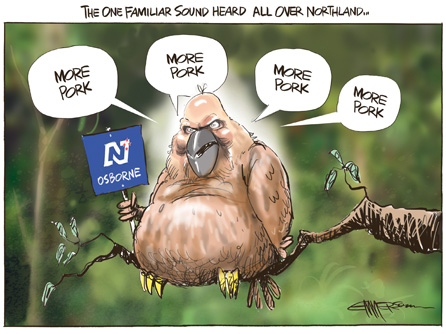 The desperation is showing.  Clearly National thinks that it is going to lose the Northland by election and it is pulling out all stops.

We had the promise of ten bridges being two laned at a cost of $69 million dollars.  I wonder how other regions feel about losing projects because of the rush of money into Northland.  One of the bridges is situated next to Mark Osborne’s home.  How lucky is that.

We then had a reannouncement of digital broadband for the area.  The feeling of deja vu was extreme.

Then we had John Key say sort of that if Northland did not elect Osborne then the area was not going to get its bridges.  And it was all Kim Dotcom’s and Nicky Hager’s fault that these bridges were not proposed during the last election campaign.

Then we had the awkward moment when it was realised that one of the projects would require the felling of one or two ancient Kauri.

Then we had news of deceptive use of statistics.  The 7,500 new jobs included new jobs in Whangarei.  And the fact that the number of unemployed had dropped by only 100 suggests that things are not as rosy as Joyce makes out.  Tricky use of language there Stephen Joyce.

Then we saw the liberal use of Ministerial Resources to help National Ministers campaign in the area.

Then yesterday we had news that local MP Shane Reti had tried to bully a local group into staying silent until after the election.  Winston Peters had the ultimate put down line when he said that rather than bullying the dusty roads lobby, National should build a bridge – and get over it.

And the reverse side of Mark Osborne’s pamphlet which mimics NZ First information trotting out the rather stale line that a vote for Peters will mean a new MP from Southland.  As Dave Clendon points out the claim is clearly wrong as currently there are precisely no MPs for the Northland electorate.

Clearly National is rattled.  Losing a very safe seat is on the cards.

37 comments on “Northland by election – National gets desperate ”