I have never seen an issue like this.  It has neatly divided progressives between those who hold sincere and compelling views that the racial profiling of part of our community is utterly wrong and others holding equally sincere and compelling views that the continuous flow of cheap credit into our country will completely destroy the remnants of our dreams for a better society for all of us.

The divisions are interesting, even amongst the Standard authors.  Tat Loo and Stephanie Rodgers are totally ad idem on the issue and are totally opposed to the racial profiling and race based analysis that has occurred.  I think it is fair to say they do not always agree on issues 😀

Red Logix, Te Reo Putake and I have advanced an alternative view although to be honest every time I have done this I have felt the need to take a shower.  The essence of the issue is appropriate, the take over of our country by foreign interests is wrong, but the target, ethnic Chinese including very long term residents is misplaced.

And amongst the broad left the response has been fascinating.  Many are contemptible at what has happened.  But when someone like John Minto whose credibility in fighting racism in Aotearoa is second to none has a complex view of the issue, or a staunch Green such as Danyl Mclaughlin says that the logic of what Labour is trying to say is fairly convincing you know that things are not that simple.  Mclaughlin is not the only Green who believes this.  Some very dedicated Greens whose beliefs and ethics I completely respect have said the same thing to me.

The right have had a field day.  Such staunch believers in racial tolerance and respect as Cameron Slater have attacked Labour mercilessly.  Steven Joyce, National’s campaign guru who came up with celebrations of ethnic diversity as National’s Iwi Kiwi billboards has claimed the moral high ground.  Remember this example of racial tolerance he was responsible for? 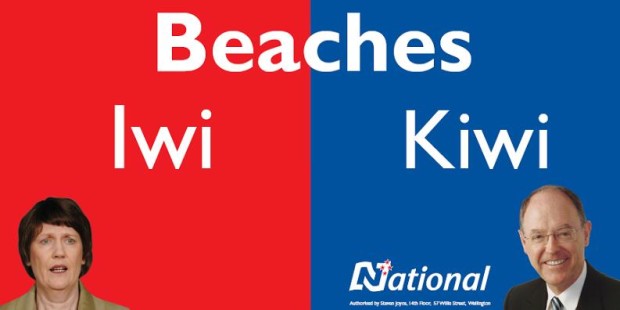 But this has now become counter productive.  So with the greatest of respect to my beloved Labour Party can we rethink our approach to this issue?