Police – ignoring their job in Southland

I’ve just been reading an article from yesterday in Stuff. “Allegations of trespassing and intimidation as Southland winter grazing protest escalates“. I think that the reporter completely missed the most important salient point – the police don’t seem to be doing their job.

Environmentalist Angus Robson, who launched a nationwide campaign against winter grazing last week, said two members of his campaign were in Southland on Saturday taking photos of “cows in mud up to their bellies” when they were approached by a farmer.

Robson would not say which part of Southland the photographers were in, but he said the farmer allegedly rammed their vehicle and then followed the environmentalists back to a property at Mossburn, in Northern Southland.

Photographing stock from a  public place like a road or verge which appears to be what was happening isn’t a problem and is in fact something that is required for any civil society.  This is (I think) one of the images or similar, obviously after recent rain. And that indicates at least one reason for this to be of interest to the public – I don’t see how anyone could justify this as being good stock handling. 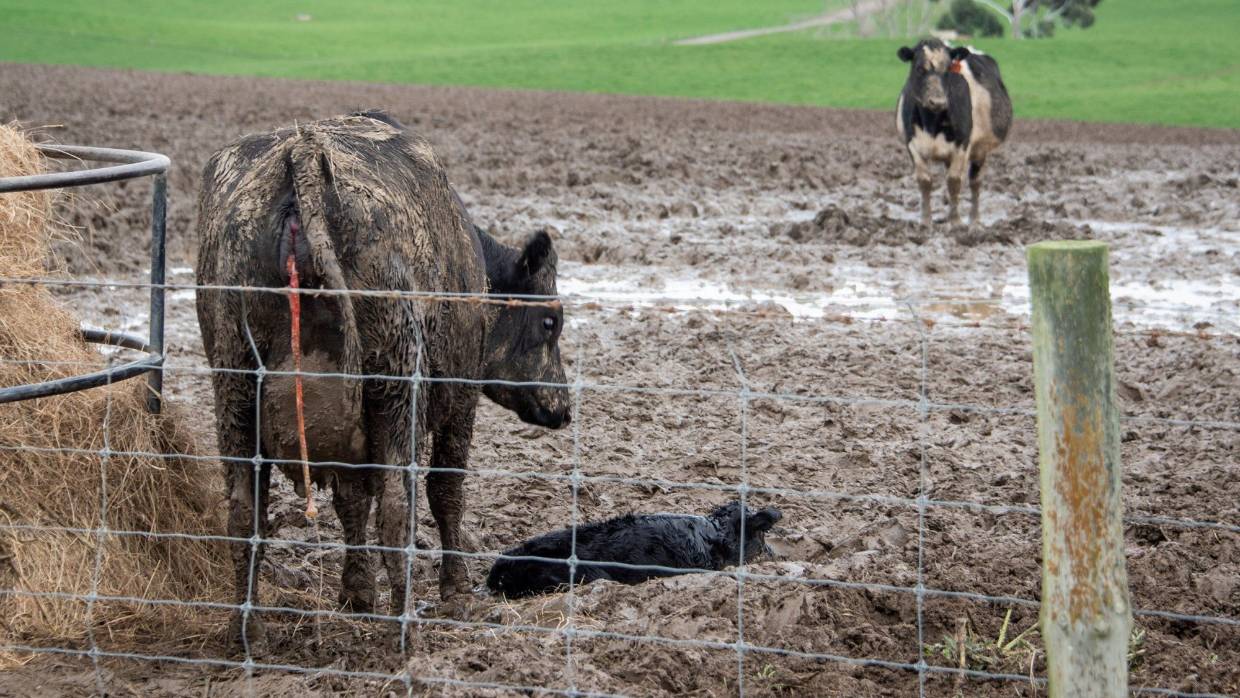 Cattle in winter grazing in southland

However that is rather irrelevant to subsequent actions.

Ramming a car is pretty clear assault and property damage – probably an offense under at the Crimes Act level if it happened at any speed. Should be pretty damn easy to establish if it happened. Just look at the vehicles.

During that time he alleges the farmer made calls to other farmers, who joined him.

He said police were called and after they left, the farmers sat at the end of the driveway of the property, “blockading the house.”

“They’re at the end of the driveway drinking stubbies now,” he said on Sunday morning. 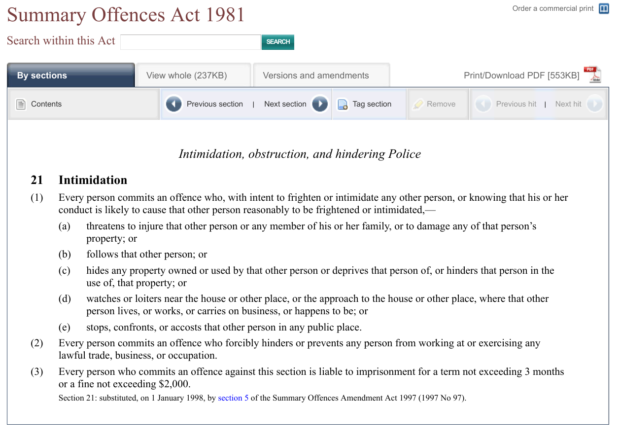 The allegation is that the farmer damaged the property of the environmentalists which is an offense under (a), followed them which is an offense under (b), probably hindered them in the use of their property if he blocked the driveway at all (c), and stopped or confronted them in a public place (e).  His lynch mob buddies are probably offending against (c) if they are preventing use of the .

I don’t even see the dimitted est-while spokesperson for the ugly mob of farmers denying any of this.

Former Southland Federated Farmers president Allan Baird called Stuff from outside the Mossburn property on Sunday afternoon and said at that time, about 10 or 15 farmers were “having a barbecue.”

“Police have been here on a couple of occasions. We’re not trying to intimidate them but they haven’t exited to go out and take more photos today.

And that last statement is clearly a blatant lie. There is absolutely no requirement for the people that this thug and his buddies has bottled up in the house to talk to them. And what this lynch mob is doing is just as clearly meant to intimidate and prevent the people in the house from taking more photos.

It simply doesn’t matter what the ‘intent’ is – that is a matter for the courts. What the police should be doing is acting on the acts. That is what their job is. And there is clearly a prima facie case against the original hothead farmer, at a bare minimum, to be charged with multiple summary offenses under section 21. He should be locked up until he sees judge because he appears to be a idiotic lunatic.

So why hasn’t that happened? I invite readers to speculate in the comments. But I suspect it is part of the very selective and timid practices of the police when it comes to dealing with activism. They are usually perfectly happy rapidly charge young or poor activists, but seem to have a completely separate set of rules about well heeled conservatives breaking the law.

The legal position around the latter is by now very well -established. In fact I helped my niece to establish in an appeal in the High Court related to 21(1)(d) more than a decade ago. She was charged under it for intimidation by loitering at a protest on a public footpath outside a shop selling animal furs.

That was the only offense that she and another activist was charged under, and personally I’m sure that the only reason she was charged was because a particular group of police at Otahuhu wanted to fraudulently obtain a search warrant on their properties, phones and computers.

As the appeal to the High Court established, simply protesting  isn’t intimidation. It costa  great deal of money to establish that. But according to Allan Baird, this isn’t a protest. According to him, it appears that this is an attempt to these idiot farmers to force the environmentalists to come out an be confronted. That is clearly intimidation under section 21(1)(d), and that is something that just isn’t allowed under section 21.

Perhaps these foolish farmers and their subservient local police should learn the rules about what is allowed in our civil society about the balance of rights. Acting like a pack of self-entitled propertied pissed fuckwits forming a lynch mob to intimidate because others are legally observing their actions isn’t part of it.

I’d suggest that this appears to be exactly the circumstances that the private prosecutions were introduced in legislation for. If the police are unwilling to act appropriately, then do their damn job for them. File a prima facie case to the court.

49 comments on “Police – ignoring their job in Southland ”