Another poll to add to current mix. Not a big shift, but in the right direction, and getting the right kinds of headline:

Support for John Key’s National Party has fallen 2.5 per cent in the latest Roy Morgan political poll, suggesting a Labour-Greens-NZ First alliance would have the best chance of governing if an election was held today.

The poll of 894 voters conducted between April 30 and May 13 found support for National was 44.5 per cent, down 2.5 points from the previous poll. … Support for Labour was 1.5 points higher at 30 per cent, the Greens were unchanged at 15 per cent and Winston Peter’s NZ First was up half a point to 5.5 per cent. Together they had 50.5 per cent. 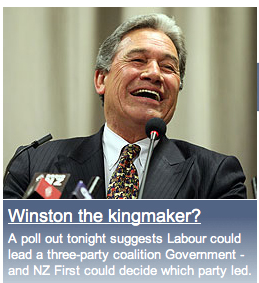 It’s a mere 2.5 years until the election, so naturally some reporting has been all excited about the prospect of “Winston the Kingmaker”. Spare me do. There is, unfortunately, a lot of water that needs to pass under the bridge before we the people get our say again, and almost anything could happen to Winston.  I’m hoping and expecting that 2014 will yield a Labour / Green coalition with no need for Peters.

This government has burned Key’s credibility, bungled the economy, and it doesn’t have anything else left in the locker. Even so (and from what I’ve seen internally of Labour’s review) Labour isn’t going to sit about and wait for the next election to fall in to their lap. They’ll be out there earning it. They’ll be putting the spotlight on National’s record:

The wage gap with Australia is growing by a dollar every month, Labour says. Finance spokesman David Parker is citing the latest Australian statistics, which he says shows the average weekly wage across the Tasman has increased by $22.16 since National came to power in 2008. … “Wages in New Zealand aren’t growing,” he said.

“Closing the wage gap with Australia was a cornerstone of National’s 2008 election promises – the government has stopped talking about it.”

Another  dollar every month – that’s the cost of a National government. And that’s the kind of simple, powerful message that wins elections.

21 comments on “Polls and elections ”