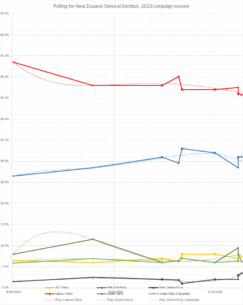 All three major pollsters have delivered their final results within two days of election day, giving us a nice picture into what the spread of results tomorrow could look like, with the trend looking good for some sort of centre-left government, but a majority government result for labour still barely on the cards in all three results.

NZF is outside of the margin of error of the 5% threshold in all of these polls- they would need a significant surge in the last two days to have made it back into Parliament, so it’s looking like it may be the second time they drop out. While good in theory, in practice this is likely to heighten Labour and National’s battle for centrist swing voters until a new party that can sit in the ground between them to some extent emerges.

While the Māori party isn’t registering particularly well in the party vote, I’d keep my eyes on the electorates where their co-leaders are running in Te Tai Hauāuru and Tamaki Makarau.

While the Greens scored heavily in the Roy Morgan as usual, which often overestimates them, to the point I’ve taken to adjusting down 70% of the result over 5% in order to have it comparable to the other two polls, Colmar Brunton also gave a really strong Green result, although Reid Research didn’t, and when adjusted this way, the Roy Morgan poll looks a lot like the Reid Research one for the Greens, so there’s a big difference between potentially as few as eight or as many as twelve MPs for them depending on how you count.

Also worth noting is that there’s some leader Approval data in the Colmar Brunton poll: Ardern’s net approval is still very strong at a rounded +55%, (74%-20%) and Collins is doing better than previous National Leaders, but still barely struggling through, at +6%, although compared to Bridges, she’ll be glad her head is above water- for no. (45%-39%)

The trend for Labour and National is relatively stable now, which is actually good news- means we can make a reasonable call that Labour will be somewhere around that 60 seat margin, and National somewhere at or just below 40. “Around 60” seats, though, is actually poised on the knife’s edge of whether Labour gets 61 or more seats, or 60 or less.

I’m generally agreed that Labour would favour keeping the Greens close by picking out policies they like from our platform to continue an ongoing relationship, if you want any big-ticket items that Labour seems to find inconvenient, like say, actually putting any big policy into place after COVID, then whether the Greens have an actual negotiating position post-election is going to be hugely relevant- and that all hinges on whether Labour dip below that 61 MPs mark.

Digging into the modelling for a bit, we can see visually here that the balance is very tight: 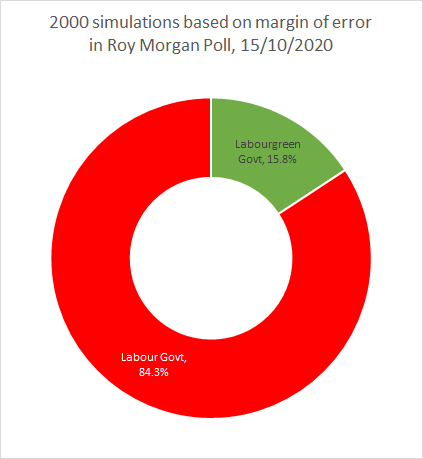 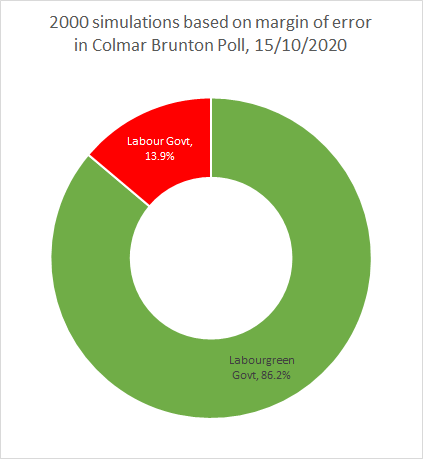 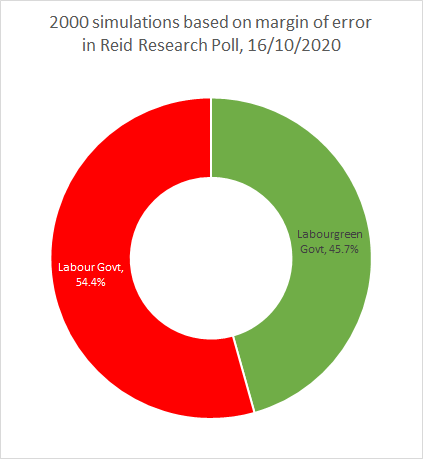 In these simulations, the threshold was largely pretty consistent:

Finally, let’s have a look at the electorate shift modelling and which MPs might be in tomorrow. This looks manageable for both large parties: