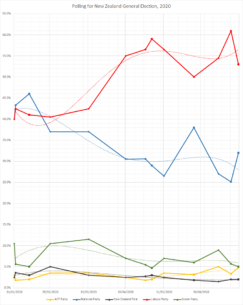 Another day, another poll! So, we can see from the party vote trend here that CB is sharply disagreeing with the other two regular pollsters over what’s going on in this election. My internet access is still spotty for another week, so apologies if there’s any relevant list rankings news missed here!

National says Curia looks a lot more like CB- to me, that actually reinforces that they’re both using phone-only polling and it’s causing them trouble getting their methodology right, but I’m sure there will be other takes as to what’s going on. I don’t think any of the last few polls have been “rogue” looking at this trend, this is a result of differing leans because of differing methodologies, and 2017 was definitely better predicted by the polling methodologies that have Labour trending up and National trending down.

TVNZ gives Collins’ approval as “+27” in their reporting, but also notes that a total of 56% approved and 23% disapproved- making that figure consistent with the way Reid Research reports it (and what I understand a “net approval rating” to mean…) gives her a +33% net approval. This is a useful point of comparison to Reid Research, who had her on +8.7%, as there really should have been minimal positive change to approval or negative change to disapproval  for Collins between the two polls with Collins only making a fool of herself in the meantime, so there’s a definite difference in lean between CB and RR lately, given they have her approves about 16 points higher and her disapproves about 8 lower. As above, given RR was closer to predicting last election and also aligns better with the National/Labour trend from Roy Morgan, I am more inclined to believe it overall on approval rating. 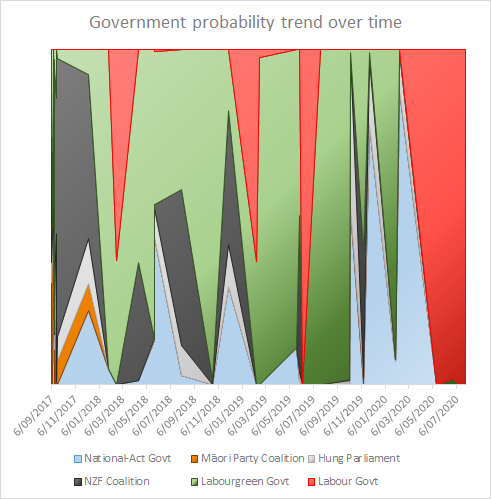 As before, the party vote analysis is full-blown red again for this poll, so I’ll give you how often my random simulations decided the smaller parties were under threshold, as well as the overall trend. 2017 showed a strong NZF trend around this time, and the shape of the race never really turned, and it successfully predicted to result- I would expect at LEAST a significant green chunk to need to show up on our trend again for a coalition government to eventuate in 2020.

The incidence of the smaller incumbent parties going under threshold in this simulation was:
Greens: 51.2% of simulations
NZF: All simulations
ACT: 62.8% of simulations
The Greens should approach 50%, so this is likely an unfriendly simulation run for them, but it’s notable that there wasn’t a single government where Labour required their help within the margin of error here.

Finally, the list analysis. Again, this analysis is based on trying to determine how many electorates won/lost, and I don’t stand by individual seat calls. I’ve tweaked it a little bit, as looking at historical elections where National is behind, they were losing too few electorate seats. The model now assumes about an eleventh of the vote is uninfluenced by the 2017 electorate vote, and that they will vote two ticks for parties whose party votes have improved since 2017. Unrelated to this change, National’s improved party vote in this poll has won them back Northland from Shane Jones in the model, meaning no New Zealand First returning without a sharp change of fortune.

These party vote results give us electorate totals of:

And thus the following Parliament:

I predict that if the election were held over this poll’s field period, we’d see the following MPs delivered in on the National list: (assuming it mirrors their caucus rankings)

It also loses them the following incumbents:

In from the Labour list would be: (no incumbents predicted to lose seats)

And on the Greens’ list, this would give us:

Will provide ACT’s expected list MPs when I get my hands on their party list, but I assume there are 5 friends of David Seymour, whether or not one of them is also named David Seymour.