Newshub reported an all-time high for the Labour Party in their Reid Research poll today, hitting 60.9% of the party vote. National were already calling it a rogue poll before it’s even announced. (it’s technically possible, but if it is rogue, it’s the type that fits well within trend and concurs nicely with current events, given the recent Roy Morgan poll released on the 14th, and their Falloon scandal and second leadership change of the year)

Newshub have also got approval (“performance”) ratings for the two leaders: (in video format only, sorry, but I’ve lifted it for those who prefer text) 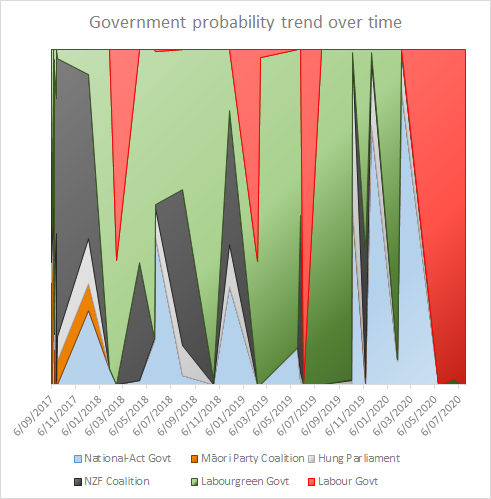 Collins may personally be happy to be above the waterline on net approval here given Simon Bridges’ first reported approval in the same poll was at a net -28.9% (+21.9% & -50.8%) on his second Reid Research poll back in February 2019. This puts Collins about 5% ahead on Preferred Prime Minister/name recognition from his starting point, and over 35 points ahead of Bridges at his start in terms of actual job approval- suggesting that National partisans like Collins or at least charitably think she’s doing her best, but many of the more centrist ones simply don’t trust her party to govern in its current state. It’s also notable that despite being better liked than Bridges, she’s still very divisive as a leader, a prospect that’s not good for National coming into an election that’s likely to be about unity and competence during a tough period, and new-look policy for the future like the recent release from the Green Party.

For the party vote analysis, we’re still sitting at a 100% chance of a majority Labour Government with these results, suggesting that reluctant swing voters at this stage are pouring into the party to avoid them having to work with coalition partners and provide a more centrist government.

The Greens simulated over the threshold in 89.7% of cases, giving the lie to Newshub’s reporting that they are “barely holding on by the skin of their teeth,” and ACT are just within reaching distance of the threshold at 3.3%, showing up in a handful of simulations to put them under threshold 99.9% of the time. NZF are always under, but we’ll get to them in a moment when I report on electorates. While Newshub has reported this switch in positions as new, that is again single-poll vision reporting from our TV news, as ACT has been ahead of NZF for three polls before this one, from both the other major polling orgs.

It’s also worth noting what ISN’T caught in this poll: Fieldwork was only open for one day after Iain Lees-Galloway’s resignation, so this may show a higher result for Labour than the upcoming Colmar Brunton/TVNZ poll will, given it’s still open for fieldwork right now, so we can be expecting another update within a week or two.

On the electorate front, given low National Party polling, the model predicts Shane Jones to win Northland, meaning Parliament looks a weeee bit different to Newshub’s predictions, as you can see on the right. With 121 MPs, the National Party is in overhang on this polling, with all list MPs out of Parliament. Based on current caucus rankings, that would mean the following MPs would not return/enter parliament, in order:

For Labour, things are looking a bit more rosy, with the following returning or entering on current polling- they may even be wondering if they need to re-open list nominations, with only 9-10 candidates left unelected at the end of the list on current polling:

This is based on the following electorates changing hands, according to a Strong Distribution model of FPP polling based on the 2017 electorate results and this poll vs the 2017 Party Vote results: