The recent 1 development of accident and disaster insurance over the last century, and its widespread non-commercial adoption across the world in the last 60 years is having a profound influence on buffering climate change. The Economist had a recent article with an excellent graph showing this.

THAT 2017 suffered from more than its fair share of natural catastrophes was known at the time. In the wake of Hurricane Harvey, the streets of Houston, Texas, were submerged under brown floodwater; Hurricane Irma razed buildings to the ground on some Caribbean islands. That the destruction was great enough for insurance losses to reach record levels has only just been confirmed. According to figures released on January 4th by Munich Re, a reinsurer, global, inflation-adjusted insured catastrophe losses reached an all-time high of $135bn in 2017 (see chart). Total losses (including uninsured ones) reached $330bn, second only to losses of $354bn in 2011.

Unlike 2011 with its expensive earthquakes in Japan (and here in Christchurch), last year it was 97% weather and climate related. This has been common and ever increasing trend. 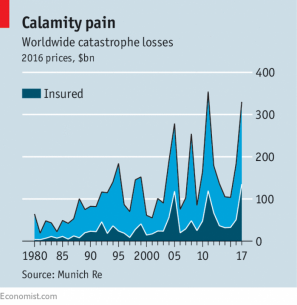 If you look at the figures adjusted to a common 2016 base since the 1980s, this pattern becomes cyclically clear in recent decades

If climate change brings more frequent extreme weather, as Munich Re and others expect, last year’s loss levels may become depressingly familiar. Already, the data show many more frequent high-loss events since 2000—lots of them weather-related—than in the two preceding decades.

The article points out that the modern basis for insurance, where insurance companies farm out the risk to reinsurance policies, has so far been standing up to increased risks.

For all the gloom, the 2017 losses were also proof of the resilience of the reinsurance industry. Insurers have long spread catastrophe risk by taking out reinsurance policies. This time, reinsurers had such ample capital buffers that they are expected to suffer only a small dent, of around 5-7% of capital. And 2017 was also the biggest test so far of reinsurance provided directly by investors, whether through catastrophe bonds or “collateralised reinsurance”, where a fund manager puts up collateral to cover potential claims. These forms of “alternative capital”, which reached $89bn in mid-2017, now make up around 14% of total reinsurance capital, up from 4% in 2006, according to Aon, a broker.

Their performance has been remarkably smooth. Investor demand has held up; many asset managers in the field have raised new money since the losses. Demand may yet grow further, says Paul Schultz, head of Aon’s capital-markets arm, since the yields on alternative capital are poised to rise because of growth in reinsurance premiums.

And that is the point. Unlike the ‘market’ abortions for trying to control greenhouse gases like the Emission Trading Scheme that National appears to have deliberately sabotaged for political reasons 2 , rising reinsurance premiums reflecting increased extreme weather risks actually impose a cost on dealing with climate change now.

In my view, New Zealand should just scrap the ETS as being a complete waste of time. Instead we probably need to treat climate a bit like we do with the Earthquake and War damages, with a few enhancements like mandatory insurance.

Legislatively insist that everyone in this country holding property, urban and rural, are required to have full coverage disaster insurance for extreme weather. I am pretty sure that this will provide an immediate political will to try to mitigate the cost of such insurance. The only way to do it is to move off risky land subject to flooding or reduce greenhouse gas emissions from polluters.

Sure, it doesn’t directly hit the polluters. But unlike the existing schemes which push the costs of climate change into the never never like the ETS does (and implicitly on to future taxpayers), calculations of risk and reinsurance premiums look forward from now and try to actually assess future risk costs to be paid now. Moreover it does so to make sure that there is profit to uncharitable investors wanting to make a profit.

Those paying increasing reinsurance premiums, and those investing to make a profit out of the misery of others will then have a direct vested interest in overcoming the lobby groups trying to get others to pay for their pollution – like the road transport lobby and farmers.

Now I’m sure that this will offend those who’d prefer more social responsibility from polluters. However I think that playing on simple greed to avoid paying the risk costs upfront for future events is more likely to induce some incentive to change now. After all those directly paying will be property owners rather than those polluting in a tragedy of the commons.

And anyway if we don’t deal with climate change at its root causes, it will provide a bloody great market price signal about what land is dangerous to build or farm on. That at least will start to reduce the costs to taxpayers for bailing out or trying fruitlessly to protect fools who like to live mere metres above sea level, drain swamps, live on flood plains or on coastal dunes.