Remembering the 5th of November and Parihaka

It didn't matter that Māori did.

Fight back, not fight, sell some, become Christian, become capitalists, farm their land, trade… The crown and Pākehā settlers wanted it, & used the most violent of methods to get. Destroying food sources, disease, and with muskets and canons.

Jack McDonald posted this poem by his Nana, J.C. Sturm, to mark the anniversary of the invasion of Parihaka in 1881. 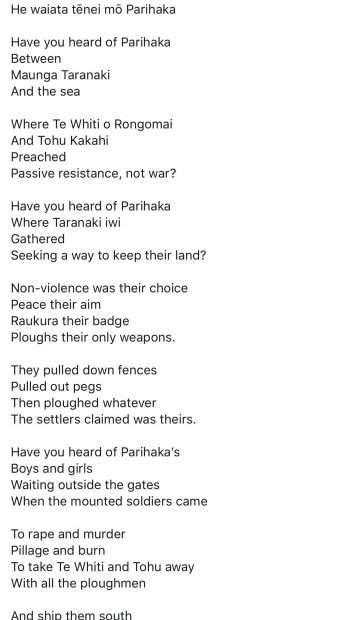 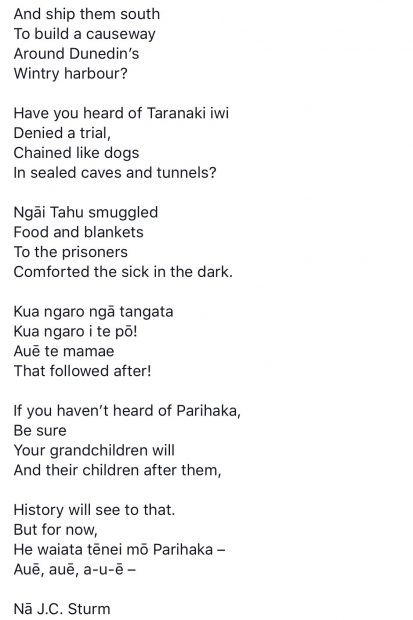 Many New Zealanders associate 5 November with Guy Fawkes and an evening of family fun and fireworks. But some Māori remember the date for a very different reason.

For Taranaki Māori, 5 November 1881 is known as ‘Te Rā o te Pāhua’ or ‘The Day of Plunder’. The invasion of Parihaka — te pāhuatanga — happened when around 1500 armed constabulary and volunteers led by the Native Affairs Minister, John Bryce, invaded Parihaka.

For months leading up to the invasion, troops had surrounded the peaceful Taranaki Māori village. They even set up a cannon on a nearby hill. While the soldiers had enough ammunition and rations to see them through a ‘bloody battle’, the reality was very different.

There was no bloody fighting. Instead, soldiers entering the village were greeted by singing children and women offering them fresh loaves of bread.

It made no difference.

Following the invasion of Parihaka, its leaders, Tohu Kakahi and Te Whiti o Rongomai, were arrested and imprisoned without trial. Sixteen hundred followers were expelled, while buildings and crops were plundered and destroyed by the Pakeha troops.

In 1903, journalist William Baucke met Te Whiti and wrote down his thoughts on the events that led up to the sacking of Parihaka. Te Whiti told him:

‘The white man in his covetousness ordered me to move on instead of removing himself from my presence. I resisted; I resist to this day’… suddenly he (Te Whiti) pointed to the mountain. ‘Ask that mountain,’ he said, ‘Taranaki saw it all!’
— ‘Ask that Mountain: The Story of Parihaka’ by Dick Scott. Raupo, 2008, p.186–187.

In 2017, over 100 years later, the Crown was again met with singing children and food baskets at Parihaka. This time the circumstances were very different.

The Crown was there to deliver te whakapāha — a formal apology for its actions over Parihaka.

‘That is why the Crown comes today offering an apology to the people of Parihaka for actions that were committed in its name almost 140 years ago.’

‘… Parihaka has waited a long time for this day,’ Finlayson also added.

The Crown acknowledges that it utterly failed to recognise or respect the vision of self-determination and partnership that Parihaka represented. The Crown responded to peace with tyranny, to unity with division, and to autonomy with oppression.

Korero, waiata, and tears — it was an extraordinarily emotional day for politicians and the 100 or so people who had travelled from Parihaka to Parliament to witness the occasion.

• the establishment of a Parihaka–Crown Leaders’ Forum
• Te Huanga o Rongo — healing and reconciliation assistance
• the setting up of a Parihaka fund
• protection of the name ‘Parihaka’ from commercial use.

At Parliament for the Bill’s final reading, Puna Wano-Bryant (Parihaka’s Papakainga Trust chair) also noted that the teaching of Aotearoa New Zealand history in all our schools was an important next step.

We want our children to not only talk about the facts of history but also about the pain and injury that has caused and that how we move forward as a nation together — Māori and Pākehā.

9 comments on “Remembering the 5th of November and Parihaka ”