Rorts in the age of internet advertising. 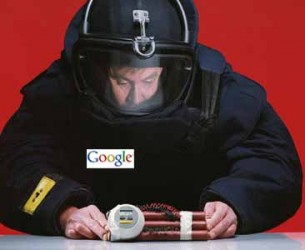 The Australian Liberal party has been posting sponsored links on Google websites pushing voters seeking information on  independent candidates and candidates from other parties through to Liberal websites.

This week, a Google search by the Herald of the names of about 200 Labor, independent, Greens, Democrats and other minor party candidates returned links to Liberal Party websites in more than 90 per cent of cases.

The sponsored links appeared at the top of Google’s search results and linked to the Liberal Party website even though the links carried the names of non-Liberal candidates.

The sponsored links, which appeared at the top of Google’s search results results page, were purchased by the Liberal Party to ensure their prominence.

While the links carried various candidates’ names, they took browsers to websites spruiking either the Liberal Party’s economic credentials or Labor’s perceived failures.

This could potentially lead to lawsuit to overturn election results in marginal seats.

Electoral law expert Graeme Orr, based at the University of Queensland, said the practice meant candidates would have grounds to challenge election results based on section 329 of the Electoral Act, which prohibits publishing information “likely to mislead or deceive an elector in relation to the casting of a vote”.

The Australian Electoral Commission had a different view.

Today, a spokeswoman for the AEC said the Electoral Act was designed in a pre-internet age. The section on misleading the voter was “about the technicalities of how to cast your vote rather than information you would use to decide who to vote for”.

Our law is much weaker when it comes to prohibition against spreading misleading information. In Australia, it runs from writ day, and contravention can be ground for overturning an election result, which would not appear to support the argument that it is just about technicalities.

In New Zealand “publishing infomation that the person knows to be false in a material particular”  is forbidden by Section 199A of the Electoral Act. It only applies on election day or the two days immediately before which does support the pre-internet interpretation. It could however overturn the election of a constituency candidate if the candidate were proven to be involved as it is a corrupt practice.

I think there should be a prohibition on spreading information which a person knows to be false. It should apply throughout the election period, and should allow for a result to be overturned.

The Liberal party has now withdrawn their google ads. The internet age has its advantages.

15 comments on “Rorts in the age of internet advertising. ”