Save the Pohutukawa Six 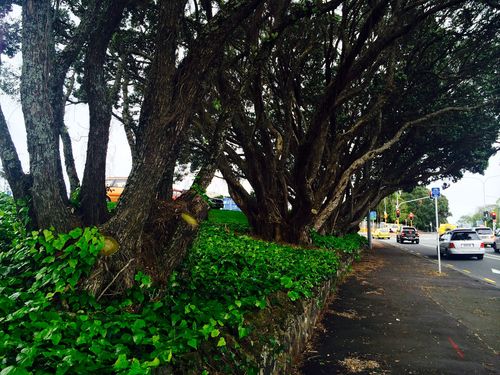 At this time of year you get to really appreciate the Pohutukawa Tree.  It seems everywhere I have been lately there has been this wonderful red/green splash of colour.  Mother nature is telling us what sort of Government she thinks should be in power!

There is a group of elderly Pohutukawa that do their best to shield Auckland’s MOTAT from the motorway and beautify the local area.  They have grown in the area for a number of years and provide a pleasant splash of nature in an area that is otherwise very urban.

Auckland Transport want to cut them down so that it can build another lane of road.

The decision has caused a great deal of local opposition.  Patrick Reynolds at the Transport Blog has been advocating against the proposal.  I am pleased that the Waitemata Local Board chaired by Shale Chambers has come out in opposition.  And Russel Brown at Public Address has also posted on the issue.

The Local Board’s position was very well formulated.  It took the opportunity to engage its own lawyer and expert advisers to oppose Auckland Transport’s application for a notice of requirement in relation to the trees.  As Board Chair Shale Chambers put it:

I want to put the Local Board’s position in clear terms. As I understand it, Auckland Transport has identified its preferred option based on certain transport outcomes it wishes to achieve but at the expense of the trees. The proposal will have a significantly adverse effect on the environment because the intersection will lose a number of trees of real heritage, environmental and amenity value. But on Auckland Transport’s own evidence, supplemented by the evidence of our own traffic engineer, another option, yet to be explored in any great detail, would achieve almost all of the same beneficial traffic outcomes.

Unfortunately the Hearings Panel rejected the Board’s position and have approved the removal of the trees.  If you want a fuller description of the process local board member Vernon Tava provides a very clear outline here.

This particular issue highlights the loss of democratic control that the Super City reform has caused.  If a local community wants to protect its iconic trees then why should an unelected entity overrule them?  And why does Auckland Transport think that a further lane of congestion inducing transport problems is preferable to the retention of some magnificent trees?

I regret it may be too late.  But if you want to do something you could start by signing the petition and the trees have their own twitter account if you want to follow what is happening.

34 comments on “Save the Pohutukawa Six ”