Shock horror, trickle down does not work 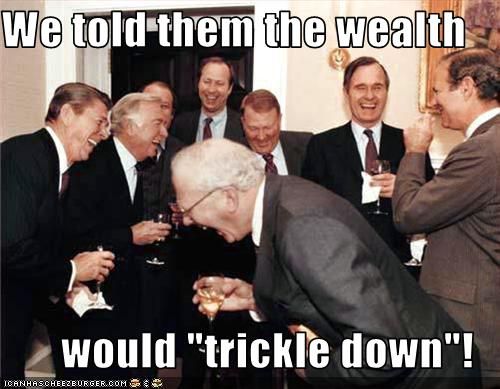 Can you remember how over the past five decades we kept being told that giving tax cuts to the most wealthy would make us all better off?  How the wealth would just trickle down?

Well there is yet another academic study from the London School of Economics suggesting that giving lots of money to the wealthiest in the hope that we will all be better off is not a good idea.

From the LSE summary of the paper:

Major reforms reducing taxes on the rich lead to higher income inequality but do not have any significant effect on economic growth or unemployment, according to new research by LSE and King’s College London.

Researchers say governments seeking to restore public finances following the COVID-19 crisis should therefore not be concerned about the economic consequences of higher taxes on the rich.

The paper, published by LSE’s International Inequalities Institute, uses data from 18 OECD countries, including the UK and the US, over the last five decades. The Economic Consequences of Major Tax Cuts for the Rich, by David Hope and Julian Limberg, shows that the last 50 years were a period of falling taxes on the rich in the advanced economies. Major tax cuts were spread across countries and throughout the observation period but were particularly clustered in the late 1980s.

It states: “Our results show that…major tax cuts for the rich increase the top 1% share of pre-tax national income in the years following the reform. The magnitude of the effect is sizeable; on average, each major reform leads to a rise in top 1% share of pre-tax national income of 0.8 percentage points. The results also show that economic performance, as measured by real GDP per capita and the unemployment rate, is not significantly affected by major tax cuts for the rich. The estimated effects for these variables are statistically indistinguishable from zero.”

It continues: “Our findings on the effects of growth and unemployment provide evidence against supply side theories that suggest lower taxes on the rich will induce labour supply responses from high-income individuals (more hours of work, more effort etc.) that boost economic activity. They are, in fact, more in line with recent empirical research showing that income tax holidays and windfall gains do not lead individuals to significantly alter the amount they work.”

The authors conclude: “Our results have important implications for current debates around the economic consequences of taxing the rich, as they provide causal evidence that supports the growing pool of evidence from correlational studies that cutting taxes on the rich increases top income shares, but has little effect on economic performance.”

Short version? Trickle down does not work.  The authors of Rogernomics and Euthenasia, and John Key and his band of merry men should hang their heads in shame.

Here is something I wrote a year ago that I will repeat without quote marks. The post was about Donald Trump’s tax cuts for the wealthy.

The theory of trickle down dates back to Milton Friedman and the Chicago School of Economics.  Relying on work by economist Arthur Laffer and the infamous Laffer Curve they argued that a reduction, any reduction in tax would improve overall economic performance.  Their analysis was simplistic, because clearly for the theory to work it was important that if public spending was decreased the replacement private spending allowed by the associated tax cut also be for a public good.  Private jets and French wine do not improve the plight of an ordinary person.

Supporters of the theory claim that Regan’s massive tax cuts in the 1980s helped pull America out of recession.  What was much more likely was a tripling of public debt from $712 billion in 1980 to $2.052 trillion in 1988 provided the stimulus.  Even with this large increase public debt was a relatively modest 41% of GDP in 1988.

And it has directly contributed to an increasing gap between the top 1% and the rest of us.

Kimberly Amadeo at The Balance offers this conclusion:

The trickle-down theory postulates that the benefits from tax cuts, capital gains, dividends, and even looser regulations on corporations and wealthy individuals would eventually flow down to benefit middle- to low- income earners. The extra wealth accruing from the deductions would drive the wealthy to invest in or expand businesses, boosting economic growth.

The Laffer Curve supports its effect but only up to the point where the tax rates are at a prohibitive range. Out of this range, trickle-down is deemed infeasible.

Trickle-down economics generally does not work because:

President Trump’s Tax Cuts and Jobs Act is of current concern because this trickle-down policy is seen to exacerbate the income inequality already kicked into overdrive by Reaganomics.

And Thomas Pitketty’s book Capital in the twenty first century is a withering deconstruction of the theory of trickle down. From the Guardian:

The gist of Piketty’s book is simple. Returns to capital are rising faster than economies are growing. The wealthy are getting wealthier while everybody else is struggling. Inequality will widen to the point where it becomes unsustainable – both politically and economically – unless action is taken to redistribute income and wealth. Piketty favours a graduated wealth tax and 80% income tax for those on the highest salaries.

Lord (Adair) Turner, the former chairman of the Financial Services Authority, says Capital is “a remarkable piece of work”. Turner, who has name-checked Piketty in his recent lectures, added: “He is saying that we have a set of tendencies at work to which the offset has to be a degree of redistribution. I completely agree with him.”

Krugman, writing in the New York Review of Books, says Piketty’s work will “change both the way we think about society and the way we do economics”.

The book has also created waves on the right. Allister Heath, writing in the Daily Telegraph, said the book was flawed but admitted that supporters of capitalism were being “slaughtered on the intellectual battlefield” and needed to get their act together fast.

The problem for Heath is that Piketty’s book seems to explain the brutal world of the Great Recession and its aftermath rather better than trickle-down economics. Capital speaks to the Occupy movement; it speaks to the under-25s in Britain whose real wages are 15% lower than at the end of the 1990s; it speaks to Generation Rent.

Trickle down is a fancy sounding theory justifying continued greed by the wealthy for even more. The sooner its complete lack of a rational let alone moral underpinning is exposed and acknowledged the better.

Maybe it is time for trickle up to be a thing?  The Covid response and the current robust state of New Zealand’s economy suggests that giving ordinary people sufficient to live on can have a beneficial effect.  For us all.

54 comments on “Shock horror, trickle down does not work ”