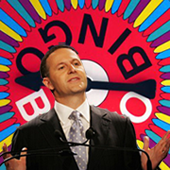 Well it’s Budget day tomorrow and we’ve got our man Steve Pierson going to the lock-up so we can get you a good ol’ Standardista analysis ASAP.

But while we don’t know what’s going to be in the Budget we can take a fair guess at what National’s response will be. So we’ve decided to play spin-bingo again. The rules are you pick what vapid lines the Nats will attach to the budget and tomorrow afternoon we’ll give big ups to those who get closest.

In the meantime here are some of our picks:

“This budget does nothing for ordinary Kiwis”

“Michael Cullen can’t be trusted to deliver on tax cuts.”

Now you’ll note that none of these talking points have any substance and none show any alternative vision but that’s pretty much why we’re betting at least two of them are in there. You’ll also note that they will attack Cullen as they have focus tested people’s reactions to him and seen that there is an opportunity to fuel the perception that he is arrogant and out of touch.

We’ll also give bonus big-ups to whoever can pick the glib phrase National tries to attach to this Budget (previous attempts have included the “Bondi Budget” and the “Chewing Gum Budget”). This time we’re picking ‘Farewell Budget’ or something on that theme.

As an aside I’d also like to put up a challenge to all of the journos that read this site: If you feel yourself itching to angle a story as “National says…” just stop and have a wee think about whether National is actually saying anything.