Stuff is banning climate change deniers from articles and comments 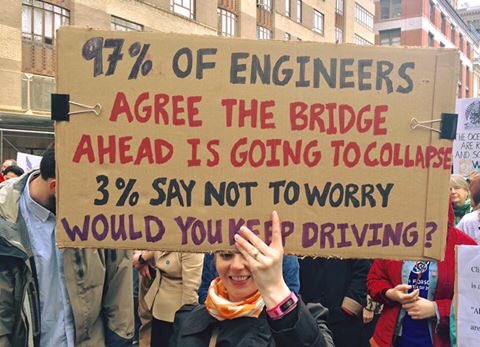 Congratulations to Stuff.  Instead of the endless on the one hand but on the other hand reporting, where on the other hand is nothing more than incomprehensible babble from the anti science right, they have adopted this policy:

Stuff accepts the overwhelming scientific consensus that climate change is real and caused by human activity. We welcome robust debate about the appropriate response to climate change, but do not intend to provide a venue for denialism or hoax advocacy. That applies equally to the stories we will publish in Quick! Save the Planet and to our moderation standards for reader comments.

The change in policy is accompanied by the announcement of a new series of stories and opinion pieces under the title of Quick! Save the planet which is described in this way:

Quick! Save the Planet – a long-term Stuff project launching today – aims to disturb our collective complacency. With insistent, inconvenient coverage, we intend to make the realities of climate change feel tangible – and unignorable.

This project accepts a statement that shouldn’t be controversial but somehow still is: climate change is real and caused by human activity.

Mature adults can disagree about the impact of climate change and how we should react. We’ll feature a wide range of views as part of this project, but we won’t include climate change “scepticism”. Including denialism wouldn’t be “balanced”; it’d be a dangerous waste of time. The experts have debunked denialism, so now we’ll move on.

There were 268 comments to the editorial written by Editor in Chief Patrick Crewdson, mostly supportive, but a few were clearly testing the boundaries.

And in the daily roundup of news of bizarre weather behaviour which is almost certainly evidence of climate change across the ditch Sydney has experienced torrential rain while Queensland has had bush fires following extreme drought.  Intense rain and record temperatures, just as predicted.

Meanwhile James Shaw’s Climate Change legislation is on its way to Parliament.  And all eyes will be on National to see if a policy consensus can be reached.

Within the next few weeks, Climate Change Minister James Shaw intends to announce the outlines of the Zero Carbon Bill the Government plans to bring to Parliament in February.

Without doubt, this will be the most important piece of legislation in generations. If it is designed and executed well, it will guide our transition to a low carbon, wealthier, more resilient and more sustainable nation over the next three decades.

To achieve those goals, the legislation has to have cross-party support. That’s the only way we can break free from short-term political machinations to work together on these long-term challenges. Across society, not just business, we need consistency of goals, policies and processes to tackle these exceedingly complex issues.

The UK pioneered this approach a decade ago. Currently more than 20 national and regional jurisdictions are using it to great effect.

Oram highlights the change in business opinion and notes that even in the farming sector the need for change is being recognised.  He concludes by saying this:

Thus, the greatest danger of all over the next few weeks is that National will listen to the foot-draggers in farming and walk away from cross-party support for ambitious climate legislation. If it did, it would cause itself considerable long-term political damage.

Conversely, if it wants a broad-based political future, it needs to show it understands where our best economic and environmental opportunities are as a nation. To that end, it should listen to business climate leaders from across all sectors but most particularly from the primary sector.

It is great that the tide of opinion is flowing towards accepting climate change as a reality and working out what needs to be done.  The question will be is this too little too late.

lprent: Do not be alarmed. Need to reboot the system. It has been up for 106 continuous days. I need to let a kernel update to go through,