National’s dilemma – business as usual is failing them.

Audrey Young’s take in Granny Herald was interesting. “No ordinary Labour speech by Prime Minister Jacinda Ardern”. That is because the political ‘business as usual’ approach by the business orientation of National campaigning using the politics of fear and envy doesn’t work well in times of crisis. Business simply has too short a viewpoint to be acceptable in government at present – or increasingly in our uncertain future.

A review of events over the past two weeks about the strange case of the leaked travel expense information, the expensive inquiry and the depressed MP.

Bridges and his cheerleaders

National is pulling out all stops to suggest that Simon Bridges is not so bad as a leader.

Young on coalition options – an edge to Labour

Audrey Young on the coalition dance: “Labour would probably have an advantage because of the greater policy overlap”, “Keeping deputy leader Paula Bennett out of the first pro-forma courtesy meeting was an appalling decision by English that simply says he was desperate to please Peters at any cost”.

Two opinion pieces on Labour this weekend offer a full spectrum from insight to inanity.

Audrey Young trashed in her own comments section

Young’s spin on the flag fiasco was – not well received.

How fitting that Audrey Young is Speaker David Carter’s very last fan in the world.

Quick notes on some pieces in The Herald this morning, featuring Audrey Young’s almost epiphany on Nice Mr Key.

While Labour leaders are in the spotlight, a good piece on Andrew Little by Audrey Young in the weekend.

If a politics editor at a major National newspaper doesn’t know basic statistics, then you’d have to ask how she retains her job? Having a jonolist apparently deliberately distort the meaning of a poll that is taken, and whose results was not linked to in the article, is a complete travesty.

There was an Audrey Young piece in the Herald yesterday, in which John Key talks about Labour’s plan to increase eligibility for free Early Childhood Education. So Key thinks this policy will cost at least ten times as much as Labour does. That’s a very big claim. But Andrey did not appear to ask for his sums, she just printed Key’s figures without comment. That was a pity because John Key’s figures are a bare-faced lie and are quite impossible.

Audrey Young and Simon Collins should get danger money for spinning this hard on jobs. But at least they’re trying, the best that Key can manage is some waffle about a “fluid market”…

Fran O’Sullivan & Audrey Young are awestruck by Judith Collins as ruthless Force. FO’S does a fan-girl rave, slipping into fanfic mode.Was the Binnie episode a daring bid to become the next Nat leader? Will English & Joyce respond with callous, socially-destructive manoeuvres?

Pagani to lead Labour to victory!

In a bold and exciting move Labour MP David Shearer stood down at today’s Labour conference and handed the reins to mild mannered media commentator Josie Pagani. Shearer said it became clear he had too much parliamentary experience for the role and the public was calling for someone ‘less like a politician’ than he was.

A lesson for the Secretary of Education

Buried in Audrey Young’s puff piece on Secretary of Education Lesley Longstone is an interesting insight into Longstone’s thinking on poverty and education. Longstone tries to downplay the link. Ignorance, or overt right-wing agenda? 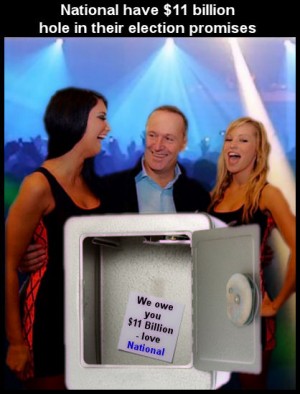 A round up of commentary from around the media on the Budget. Well, the media that’s in written form anyway. I’ll be damned if I’m doing any transcribing. Favourite lines, Vernon Small: “Bill English has written a one-dimensional tax-shuffle Budget”, John Armstrong: “Those looking for the bright ideas and initiatives to galvanise economic growth are going to be hugely disappointed”

Two senior journos, one side of the story

Two highly paid and highly experienced New Zealand Herald gallery journalists put their heads together for a budget story and what does the lucky reader get?

The world according to Bill English.

Pravda would be proud but most journalism tutors would be reaching for their red pen.

If you want to read something vomit-inducing this morning, there’s no need to go any further than Audrey Young’s interview with Key about his overseas trip. Key talks about touching Barack Obama, sharing secrets with Stephen Harper, discussing Berlusconi’s boat, and how Angela Merkel knew Helen Clark quite well. If only Audrey Young were taking the piss, it wouldn’t be so yellow and chunky.

Like most on the left I’ve pretty much resigned myself to the Herald’s current bias toward National but today’s effort by Audrey Young is a new low altogether.

You see it’s not just that she writes up all of John and Paula’s lines it’s that she provides no balancing comment.

The Herald asked this morning whose word was more credible on the Worth issue, John Key or Phil Goff. Their political editor Audrey Young has just answered the question for them. “One politician was bound to be deeply embarrassed today, Phil Goff or John Key. One would be right and one would be wrong. And […]

from Beck Vass: “With an average jury trial taking at least 12 months, and judge-alone trials taking just six months [that’s actually from charging to end of the case, not the length of time in court], trial times would be halved, reducing the trauma for victims and backlogs in overloaded courts. Mr Power said his […]

Audrey Young writes on her blog that National would do well to heed the opinion of the Human Rights Commission who have today spoken out against National’s decision to rush through a number of pieces of important legislation under urgency – denying them proper scrutiny. She points out that this is the very same Commission National […]

This week the election was announced and the third question to the PM (asked by Colin Espiner) was about whether The Standard possibly knew the date (Helen doesn’t tell us either). Colin thinks we’re being sensitive about the mainstream media’s attitudes to The Standard as shown in a comment he made on his own blog […]

Some of the more excitable righties on the blogosphere and John Key have taken a throw-away comment in Audrey Young’s blog to mean that Helen Clark said Labour will be doing push-polling. Here’s what was actually said, according to Young’s recording: Reporter: Will Labour use push-polling with ‘the truth?’ Clark: Well I’m not sure how […]