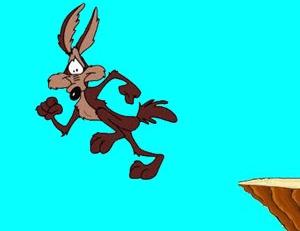 Rod Oram’s Sunday Star-Times, reprinted on Facebook here, has a useful roundup of the recent chorous of economic warnings:

Our Road Runner economy is zooming towards the cliff-edge

When the Road Runner zooms out over a cliff, looks down and sees the gaping chasm beneath, it loses momentum and plummets.

That would be Wile E Coyote you’re thinking of, but we won’t hold it against you!

Perhaps the cartoon character is telling us something about the New Zealand economy. Seven news items this week give us a glimpse into the void.

1. Auckland house prices and the NZ dollar are “overcooked,” says David Hisco, chief executive of ANZ in New Zealand. “The ending is pretty much the same – sometimes a little plot twist, but usually messy.”

2. Global dairy prices are struggling to recover, says the OECD-FAO in their annual world agricultural outlook. To break even, the average NZ farmer needs a price of US$2,650 per tonne of whole milk powder. But it won’t reach that level until 2019. …

3. Inflation is moribund. It was 0.4 per cent in the year to June, and equally weak or dipping into deflation in many other countries. …

5. The global economy is slowing. In April, the IMF reduced its forecasts for global growth, with only China among large economies edging a tad higher. Since then the IMF has highlighted Brexit and other factors that have made the outlook more uncertain.

6. Global income is stagnating for many people. Two-thirds of households in 25 advanced economies suffered flat or falling real incomes between 2005 and 2014, according to analysis just released by the McKinsey Global Institute. Some 540 million people are affected, says the report available at nz2050.com/McKinseyInequality.

7. Voter fury is spreading. The vindictive, mob mentality of US Republicans at their convention this week is but one example of the global malaise. Donald Trump, their agitator-in-chief, believes this tide of outrage will sweep him into the White House. …

We are utterly exposed to all these local and global conditions. Yet, our government deludes itself, and tries to sucker us too, into believing the high dollar, house prices, immigration and tourism are all signs of success.

We’re not at the cliff-edge yet. But only strong-eyed realism will save us in time.

We have the wrong government for “strong-eyed realism”. National specialises more in lies, denial, and electoral expedience. Bummer.

23 comments on “Oram – seven warning signs for the economy ”