Monbiot on the embedded economy

A model for a sustainable economy. Something to ponder on a wet holiday weekend. From The Guardian:

Finally, a breakthrough alternative to growth economics – the doughnut

Instead of growth at all costs, a new economic model allows us to thrive while saving the planet

… Faced with a multifaceted crisis – the capture of governments by billionaires and their lobbyists, extreme inequality, the rise of demagogues, above all the collapse of the living world – those to whom we look for leadership appear stunned, voiceless, clueless. Even if they had the courage to act, they have no idea what to do.

The most they tend to offer is more economic growth: the fairy dust supposed to make all the bad stuff disappear. Never mind that it drives ecological destruction; that it has failed to relieve structural unemployment or soaring inequality; that, in some recent years, almost all the increment in incomes has been harvested by the top 1%. As values, principles and moral purpose are lost, the promise of growth is all that’s left.
…
In Doughnut Economics: Seven Ways to Think Like a 21st-Century Economist, Kate Raworth of Oxford University’s Environmental Change Institute reminds us that economic growth was not, at first, intended to signify wellbeing.

The aim of economic activity, she argues, should be “meeting the needs of all within the means of the planet”. Instead of economies that need to grow, whether or not they make us thrive, we need economies that “make us thrive, whether or not they grow”. This means changing our picture of what the economy is and how it works.The central image in mainstream economics is the circular flow diagram. It depicts a closed flow of income cycling between households, businesses, banks, government and trade, operating in a social and ecological vacuum. Energy, materials, the natural world, human society, power, the wealth we hold in common … all are missing from the model. The unpaid work of carers – principally women – is ignored, though no economy could function without them. Like rational economic man, this representation of economic activity bears little relationship to reality.

So Raworth begins by redrawing the economy. She embeds it in the Earth’s systems and in society, showing how it depends on the flow of materials and energy, and reminding us that we are more than just workers, consumers and owners of capital.
…
The diagram consists of two rings. The inner ring of the doughnut represents a sufficiency of the resources we need to lead a good life: food, clean water, housing, sanitation, energy, education, healthcare, democracy. Anyone living within that ring, in the hole in the middle of the doughnut, is in a state of deprivation. The outer ring of the doughnut consists of the Earth’s environmental limits, beyond which we inflict dangerous levels of climate change, ozone depletion, water pollution, loss of species and other assaults on the living world.
…
As well as describing a better world, this model allows us to see, in immediate and comprehensible terms, the state in which we now find ourselves. At the moment we transgress both lines. Billions of people still live in the hole in the middle. We have breached the outer boundary in several places. 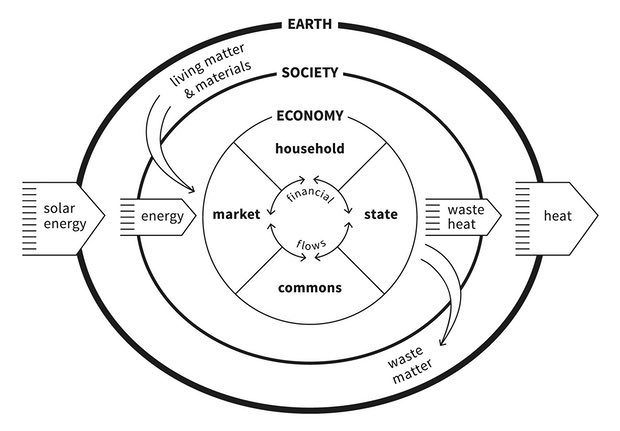 Well worth reading the whole piece in The Guardian.

10 comments on “Monbiot on the embedded economy ”