No Right Turn: the obvious question

One in four property speculators aren’t paying the bright-line tax.

Toby Morris explores the differences in how tax fraud and benefit fraud are dealt with, and asks where our sympathies should be.

Collins’ excuse is just waffle. Why won’t the Nats follow Australia and UK in a crackdown on multinational tax avoidance?

The political hills are echoing with the aftermath of Meteri Turei’s confession of lying to WINZ, and Paula Bennett’s conciliatory and very precisely worded claim of not having done so “deliberately”. A good time to revisit the topic of benefit fraud vs white collar crime / tax evasion.

A short video produced by US unions “to support a fairer tax system”. 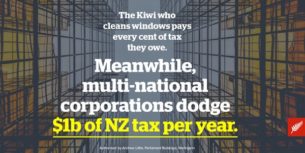 The link between tax havens, criminals and the amoral rich

“The Panama Papers issue is either illegal, or verging on illegal, it’s tax evasion, rather than tax avoidance,” Brash said.

By enabling tax evasion for the rich in other (notably South American) countries NZ is exporting poverty. It’s all perfectly legal. And that’s exactly the problem.

Jurgen Mossack told Field his business involved people “trying to avoid paying taxes in their home countries” – crucially “avoidance”, “unlike evasion”, is within the law.

In it he/she mentioned just one national leader by name, singling out our very own John Key, for his “curious silence”…

Bowron on a tired government

Jane Bowron writes in the Dominion Post: “Two things happened this week that could signal the beginning of the end of John Key and his government.”

What tax evasion robs us of – in NZ

Gareth Morgan estimates that NZ could be missing out on up to 25% of total income tax because the rich aren’t paying their fair share. What could a government do with an extra $7.5bn a year?

Only way to deal with tax evasion

What tax evasion robs us of

An interesting piece in The Guardian looks at the costs of tax evasion, and how (in America) the missing funds could be used to fund a UBI.

The Panama Papers show that NZ operates a tax haven. Key’s denials don’t hold up, particularly in the light of at least two three prior warnings that his government has received.

Another week another banking scandal

Another big tax evasion scandal with links to NZ. Don’t expect the government to spend any time looking in to this.

For me the funniest thing that happened last week was Cameron Slater proudly announcing that he’d put in a privacy complaint about the someone hacking his data. Three days later he finds out that he was the target of a privacy act prosecution for similar acts.

The Nats like bang on about benefit fraud, are they just as keen to go after tax evasion by the super-rich?