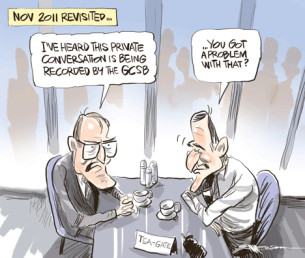 Law enforcement on Planet Key must be a strange business: “Mr Key says he called in the police on the teapot tapes because he wanted to find out if there had been an offence. He argues Dotcom is different, because his Government has already admitted what it did was unlawful.” So, what do the Planet Key Police do they do when they catch a crim? Tag him and let him go?

Update: Breaking news – we all expected this didn’t we – Key was briefed on the Dotcom case in February.

The International Federation of Journalists has condemned police demands for media organisations to hand over information about the tea tapes.

Much as some of us have enjoyed watching Key squirm, this has gone too far. Time to call off the cops and release the tape.