Tax cuts or fix this…

Auckland City Councilor Richard Hills was on to something yesterday when he tweeted: 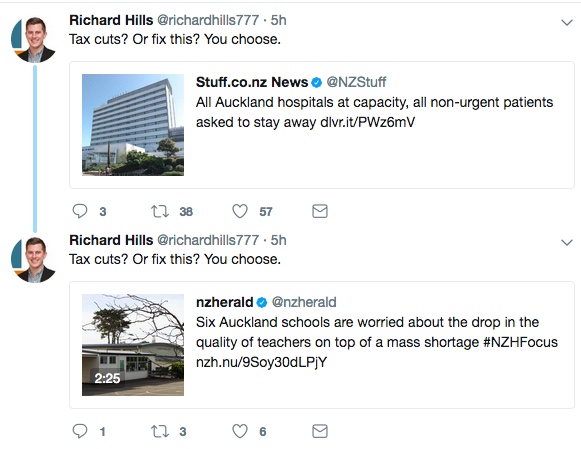 There’s a few more things below need fixing before tax cuts. You might want to add your own in comments. Good thing Labour is promising to cancel the tax cuts and spend billions more on health and education.

Dr Bonning says the hospital doesn't have enough beds to cope with the influx of patients. https://t.co/tBp5SrqblE

Hospital is too dire to inspect https://t.co/FApZV5AHAy

Over 700 schools in NZ are overcrowded or at risk of overcrowding. Another shameful National Party legacy https://t.co/gAsMArDcZG

Suicide is now the leading cause of death for those aged 15 to 19 in New Zealand #BreakTheSilence https://t.co/0WEm5ZMWvL pic.twitter.com/sPBqh2kphk

And we'll put more in the pockets of low and middle income earners, too.
Read our full plan for families here: https://t.co/QJqsah34X5 pic.twitter.com/wMHsruHnfZ