The $10b hole in National’s budget

Things are going from bad to worse for Steven Joyce. Labour has released its estimate of the cost of lost dividends by 2025 if National’s asset sales plan goes ahead: $9.7b. All omitted from National’s budget. Labour has challenged National to concede the numbers or provide its own. Instead, Joyce’s excuses just show he doesn’t understand accounting. This is getting seriously embarrassing for National.

We all know now that National has booked the revenue from asset sales, which it doesn’t have a mandate for, but not booked the costs. Budget 2011 includes the revenue but not the loss in dividends. Bill English confirmed it in Parliament last week to David Cunliffe when discussing the debt track in the Budget:

Hon David Cunliffe: Given that the Minister’s 2011 Budget has already booked the proceeds of those asset sales, for which he has just confirmed that he lacks a mandate, did his Government’s Budget 2011 Fiscal Strategy Report set the upper net debt ceiling at 35 percent, and what guarantee can he offer that his policies will not break this limit when his Budget does not properly account for the costs of his Government’s plan to sell public assets?

Hon BILL ENGLISH: The 35 percent ceiling is well above where we expect net debt to peak, which will be just under 30 percent. I think this will be more of an issue for the member. If he says he will use a capital gains tax to offset sales of assets, he cannot count the dividends, because they are still in the Budget now. He cannot add dividends from retaining State assets. They are still in the Budget. 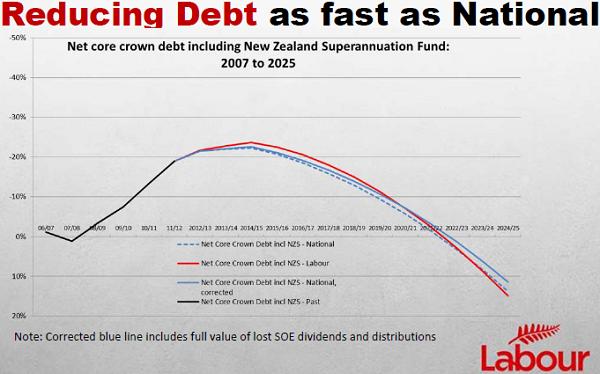 Labour haven’t released the full calculations but they reckon it will add up to $9.7 billion by 2025, lost dividends and the interest resulting from extra borrowing as a result combined.

That seems like a lot but we’re talking 10-13 years’ dividends on $7 billion worth of assets. Add in inflation, add in compounding interest, and $10 billion could well be in the right ballpark.

At any rate, it’s up to National to provide their own numbers to counter Labour’s. Steven Joyce, who is fronting the issue [is Bill English overseas as well as Key? – Eddie], has refused. Instead, he says:

Oh dear. Joyce hasn’t been listening to the boss: the proceeds from sales and their impact on debt are already booked in the Budget, the lost dividends have not been. So, he can’t say ‘oh, the lost dividends will be offset by reduced borrowing’ because that would be counting the sale proceeds twice.

I hope he didn’t do that when he used to run Mediaworks.