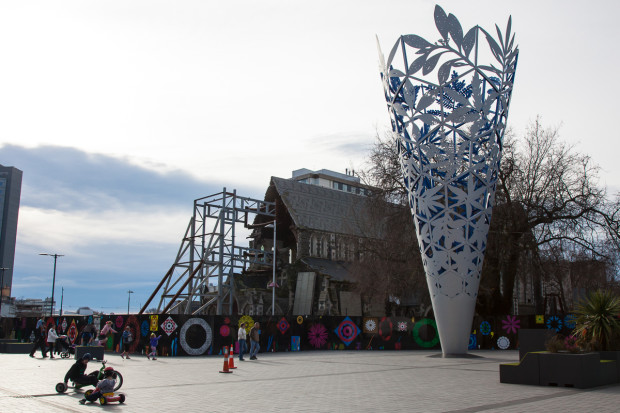 Canterbury’s rebuild has been going on for a number of years now.  The country’s economy has benefitted.  Without the disaster it is likely the economy would have slipped into recession a while ago.  But rebuilding a major urban area after the trauma and disaster of multiple earthquakes should not be the basis for an economic policy.  And you have to wonder what sort of country we live in when expensive convention centres can be planned but locals do not have enough blankets.

I spent a bit of time walking around the city recently.  Things are improving.  Cathedral Square is again accessible and people obviously want to again make it a gathering point.  Nearby there is a neat pop up market where the shops are constructed out of containers and good food and coffee and interesting things can be bought.  But the signs of devastation are still clear even though some of the anchor projects are well under way.

A recent post by Barnaby Bennett has attracted a lot of attention.  He is a director of Freerange Press (www.projectfreerange.com), has edited two books about the rebuild (Christchurch: The Transitional City and Once in a lifetime: City-building after disaster in Christchurch).  He obviously has some expertise and some understanding and clearly has spent a lot of time thinking and writing about the rebuild.

His latest post Yeah yeah yeah, nah Minister: Why Brownlee is unfit to lead the recovery needs to be read in full.  And recent Government decisions about the rebuild perfectly amplify what he has written.  The announcement of the formation of Regenerate Canterbury and the disestablishment of CERA is as clear an admission of failure as you could hope for.

Bennett sets out ten clear reasons why Brownlee should not be in charge of the rebuild.  These include Brownlee attacking others rather than acknowledging mistakes, his misleading of the public over things such as the potential rebuild cost of the town hall, his inability to work with others and his quickness to bully them, the farce over the proposed convention centre, his disdain for the city’s heritage, his lack of engagement with the city, his failure to understand how the rebuild could be ecologically focussed, his failure to make decisions in a timely manner, that he thinks EQC has performed well and last but not least because he does not understand what makes a city function properly.

This is a quick grab of the essence of Bennett’s article but as I said read the whole post to get a more comprehensive understanding of what is going wrong.

To emphasise the state of the relationship between Christchurch City Council and Brownlee two councillors liked Barnaby’s article on Facebook but after some publicity in the Christchurch Press both councillors removed the post from their facebooks.  Their response I found quite unsettling because they said the post was thought provoking and the contends needed discussion and clearly this is true.  I guess the disdain the Government has for democracy in Canterbury is cause for them to be concerned.

20 comments on “The Canterbury rebuild ”