The Carnival of Revolt

The British website False Economy has just put up “12 essential posts”  on the significance of the British student protests. My favourites are this, this, this,  and this one. There’s no doubt that this is evolving into something big, in ways that the main stream media, with a few exceptions, has been slow to grasp.

It’s not just about fees, or cuts, but about the essential corruption of the current system; so it replays the confrontation between the great British radical movements of the past and the landed-gentry “Old Corruption” that they fought to tame. Compared to 1968, the student movement is now much larger and more broadly based, with deeper roots into the working class and society in general, and so the revolt is, if anything, more profound. 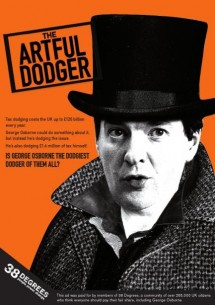 The latest action has been to publish witty ads outing the Chanceller of the Exchequer George Osborne as the most artful of tax dodgers in a government of dodgers (click to see the full view).

The protest movement knows it can win, because the Liberal-Conservative coalition only has a tiny minority in Parliament, and no real mandate for its policies, which are those of a hidden agenda; even the IMF, in a stark reversal of its past line, has teamed up with the International Labor Organization to warn that tax breaks for the rich and austerity for the rest risk making the recession worse and creating a “wasteland of unemployment“, a problem that can perhaps only be solved by increasing workers’ power and level of unionisation.

Yet none of this (perhaps predictably) has had any effect on a Conservative political class, the dominant element in the coalition, which is so obviously engaged in feathering its own nest, when it is not playing a bug-eating Renfield to the vampire squids of Wall Street. The Liberal Party faces oblivion. As for Labour, its elevation of the relatively new and left-wing Ed Miliband seems to have been a smart move; it would have been a catastrophe for Labour if its leadership, too, were seen as part of the Old Corruption that must be swept away.

5 comments on “The Carnival of Revolt ”