The cost of our clothes

When I was growing up in the 60s, my mother used to make most of our clothes.  By the time I was in my late teens, in the 60s, it became easier to buy relatively cheap, off the peg clothes in shops.  Many people now know nothing else.  These days. most of those clothes are made in factories in relatively poor countries.  Many of us are aware, that those clothes are made in factories where people work in poor conditions, for wages that are very low by our standards.

This is not our doing, but many of us often benefit in small ways from the relatively easy access to affordable clothing. Ultimately however, these clothes are produced through a system that enriches the corporate elites.  This is the same system that is continually undermining workers, beneficiaries and working conditions in countries like NZ, though no to the same degree as in less well-off countries. The profiteering by the Western garment companies, ultimately damages us all.

Our MSM rarely draw attention to the conditions under which our clothes are produced.  When there are accidents in the garment factories, due to their unsafe conditions, our MSM rarely write about the underlying causes.  In poor countries, only disasters caused by “acts of god” are given the attention they gains our sympathy.

Pilger did a documentary in 2001, showing how globalisation of the garment industry resulted in people in places like Indonesia working in appalling conditions for meagre wages, so that designer brands like GAP could be affordable to buyers in western countries.  It was shocking at the time, for those of us who saw it.  But then it moved into the background noise of the diversionary infotainment stories in our media. 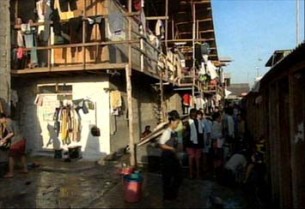 It’s a powerful documentary, in Pilger’s inimitable style.  It expresses strong views, based on some in depth research.  His website provides the rationale of the documentary:

The film turns the spotlight on the new rulers of the world – the great multinationals and the governments and institutions that back them such as the IMF, the World Bank and the World Trade Organisation under whose rules millions of people throughout the world lose their jobs and livelihood. …

To examine the true effects of globalisation, Pilger travels to Indonesia – …

… where high-street brands such as Nike, Adidas, Gap and Reebok are mass produced by cheap labour in ‘sweatshops’ and sold for up to 250 times the amount received by workers.

The documentary shows conditions in a large sweatshop in Jakarta, where workers (mainly women and children) live in squalid camps, in order to earn just over half the amount deemed to be a “living wage” by the Indonesian government.

Many children there were undernourished and prone to disease. While filming, Pilger himself caught dengue fever.

Last month there was possibly the world’s worst industrial accident in a garment factory in Bangladesh.  The NZ Herald report on it a few days ago, focuses mostly on the government’s poor oversight, and dodgy structure of the building.

Finance Minister Abul Maal Abdul Muhith spoke as the government cracked down on those it blamed for the disaster in the Dhaka suburb of Savar. …

The government appears to be attempting to fend off accusations that it is in part to blame for the tragedy because of weak oversight of the building’s construction.

The article fails to mention the underlying cause of the “accident”: that the garments were being produced for some major Western brands.  It fails to provide the context in which pressure from “the new rulers of the world” results in governments and factory owners in poor countries cutting corners.

Overnight, above NZ Herald article has been updated.  This morning I’m pleased to see the article now headlines the pressure on Western retailers to fix the factories.  However, while references to the multinational corporations have been inserted, the original focus still dominates. 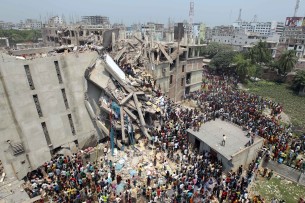 As reported by Inquirer News:

The police control room overseeing the recovery operation said the death toll stood at 705 on Tuesday afternoon as workers pulled more bodies out of the wreckage of the eight-story building that was packed with workers at five garment factories when it collapsed on April 24. The factories were making clothing bound for major retailers around the world.

The disaster is the worst ever in the garment sector, surpassing the 1911 garment disaster in New York’s Triangle Shirtwaist factory, which killed 146 workers, and more recent tragedies such as a 2012 fire that killed about 260 people in Pakistan and one in Bangladesh that killed 112, also in 2012. It is also one of the deadliest industrial accidents ever. …

The workers, many who made little more than the national minimum wage of about $38 per month, are demanding at least four months in salary. The workers had set Tuesday as the deadline for the payment of wages and other benefits.

Though the worst, this “accident” wasn’t the first.  In November 2012, Al Jazeera reported on two recent fires in Bangladesh garment factories.  Workers a the second fire were angry that nothing had changed after the first fire.

Many of the Western companies that were getting their garments made in the factory that collapsed in April, are failing to own up.  According to Al Jazeera on 27 April, “activists” have become highly critical of the profiteering corporates.  Only “British low-cost fashion line Primark and Spanish giant Mango” have so far put their hands up. Others, like Wal- Mart are “investigating” or in denial.

The US said it could not confirm whether any US companies were sourcing garments from the complex, as protesters in San Francisco targeted the headquarters of Gap with banners reading “No More Death Traps”.

The International reported on May 3, does make the connections the low prices and “tight deadlines” demanded by retail companies in the US and Europe, and the dangerous working conditions. Primark was the main retailer that owned up to sourcing products from the factory, and expressed their concern.  Others still keep a low profile.

This is the cost of our clothing; produced by a “neoliberal” capitalist system that favours the elites, and ultimately damages us all to a greater or lesser extent.

[update] NZ Herald is now reporting the death toll has risen above 800.

23 comments on “The cost of our clothes ”