The future for oilâ€¦

The graph below shows a comparison between the world’s likely demand for liquid fuels (including oil) over the next 20 years (the blue line) and the various components that will make up the supply of liquid fuels over that time. The emerging gap is alarming, as ‘Unidentified Projects’ would actually be more accurately described as ‘unfulfilled demand’ meaning quite literally a demand for oil that will not be able to be met. Perhaps what is most interesting about this graph is that it doesn’t come from a peak oil thinktank or an environment group it comes from the USA Department of Energy. It is their official forecast for the supply of liquid fuels over the next 20 years. Forget wondering when peak oil might happen in the future the answer to that question is: it’s already happened.

As anyone who has ever done even the most basic study of economics would know, what happens when demand is greater than supply is that prices go up. This prices enough people out of the market to bring the level of demand back down to what is actually supplied as you can’t exactly consume something which doesn’t exist. An interesting analysis of the possible effects of peak oil can be found here (Hat Tip, AKT).

From the same source it’s interesting to look at how the split of where that oil goes is estimated to change over the next 20 years: 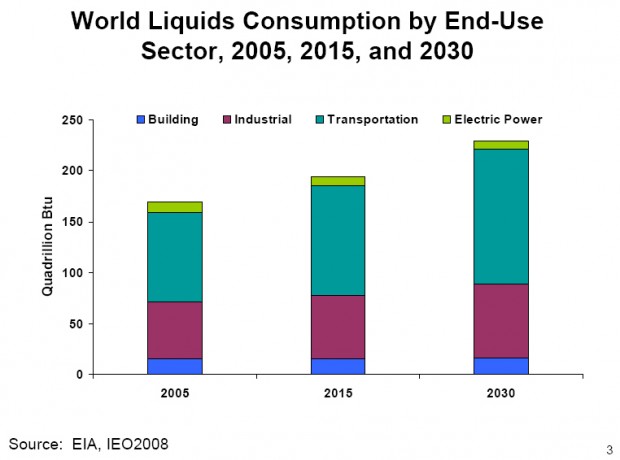 Transportation is projected to become an increasingly large consumer of liquid fuels over this time largely due to rising car ownership in developing world countries. This is likely to place even more pressure on the supply of transportation-grade fuels potentially pushing up their price even further.

So what does all this mean? Well for a start we can bank on petrol being a heck of a lot more expensive than it is now in the relatively  near future. Secondly, as we get towards 2030 it might actually be somewhat difficult to even secure a reliable supply of liquid fuel for our vehicles as there will be such a huge gap between the high level of worldwide demand and the available level of fuel supplies. In short, the days of the petrol-powered vehicle are limited.

Now the answer may be electric vehicles, but they still require a lot of oil in their manufacturing while the roads they drive along also require a tremendous amount of oil to build. Furthermore, electric vehicles are incredibly expensive at the moment and it may be a while before their prices truly come down. Given that last time petrol prices cracked $2 a litre here in New Zealand traffic volumes fell quite significantly, one does wonder how sensible it is to be spending $11 billion on state highways over the next decade.