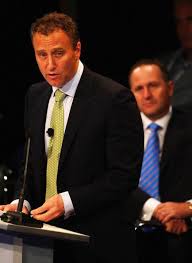 This year saw the continuation of a trend that has been evident for some years.  The media became dumber and nastier and more superficial as cuts to spending on serious journalism increased and power was increasingly dominated corporate interests. The two primary examples were the axing of Campbell Live and the gutting of Mihi Forbes show Native Affairs.  Both journalists are now based at Radio New Zealand but this appears to be the last bastion of quality journalism.  And don’t be surprised if the Government does something about that.

TV3 is failing miserably.  The final straw as far as serious reporting is concerned may be the culling of 3D which was met with resistance by those remaining who want to actually be journalists but their fate was inevitable.  If you want to understand the calamity that has happened the latest ratings that I have seen suggest that the current viewing of Story are about a quarter of the final Campbell Live viewing figure.  The panic button was pressed when Campbell Live figures hit 240,000.  The Story’s figures are just above 140,000.  How do you describe the level of competence that achieved this?

Elsewhere Rachel Glucina left the Herald after questions were asked about how her breaking of the Amanda Bailey John Key ponytail pulling story.  Her new Mediaworks venture failed miserably.  Julie Christie faced questions after a Scout page featuring a video of “her home” magically disappeared after questions were asked.  I am sure that just like Cactus Kate’s website it was just a matter of tidying things up and there was nothing significant happening.  But whoever thought that videos of Mike Hosking washing his car was going to work?

While on the left we celebrated the fitting conclusion of the right’s attempt to manipulate the media for their benefit the basic fact is that overall the media has been damaged and is worse off because of what has happened.  There has to be a better way.

Elsewhere the same old continued with Mike Hosking and Paul Henry continuing to dominate although in both cases the damage they are doing to the concept of an independent media is either being ignored or promoted.  If someone can provide a rational reason why the state broadcaster should employ as a front person someone so clearly supportive of the Government please do.

It is clear however that National is no longer using Slater to attack its opponents and he is now no longer the recipient of Beehive sourced information.  I am sure that Judith Collins’ return to Cabinet was made on the promise that she will no longer feed Slater with the sorts of information that she used to.  The tip line I suspect is now permanently out of order.  And I doubt that Mark Hotchin is contributing to Cameron’s running or living expenses.

I suspect also that John Key is no longer taking Cameron’s calls.  The occasional attack post he writes about the party must be causing them concern because he really is a loose cannon but hey when you live by the sword you may die from wounds inflicted by said sword.

The police raid on Nicky Hager reached an appropriate conclusion, at least for now, with Justice Clifford determining that the police behaviour was “fundamentally unlawful”.  I expect there will be appeals but I predict that the basis of the decision should survive as the breach was too egregious.

One aspect of the case that has not, as far as I am aware, received detailed comment was the police’s decision to label Hager as a “political author”.  It may be that they were relying on this decision of Justice Winkelmann involving Kim Dotcom where she ruled that writing a book was not a “news activity” within the meaning of the Privacy Act and therefore outside the provisions of the Act.  But this is an extreme stretch of the decision and confuses the Evidence Act protection for journalists with the Privacy Act requirement for gathered information to be disclosed.

Russell Brown foresaw the problem.  He posted this in June 2014, pre dirty politics, about the implications of the Dotcom decision:

There’s an obvious candidate here: Nicky Hager. Hager’s books, which have told us a great many things the powerful would not wish us to know, rely strongly on his interactions with whistleblowers. If Hager, Fisher, Gilbert and others like them cannot promise their sources confidentiality, their stories will go untold.

There was similar controversy when John Roughan was forced to release tapes of John Key relied on to write Key’s biography.  The principle is the same.  Journalists writing newsworthy books should be allowed to rely in journalist protections.

The blogs continue to grow in relevance and this is where more and more informed commentary can be discovered.  As an example Peter Aranyi’s review of the papers that formed part of the Chisholm review into Collins and the head of the SFO provide essential reading and he is performing a job that the main stream media has ignored.  His first post is on Slater’s evidence and his second analyses Collins’ evidence.

Overall I would rate the current year as just like last year only worse for those interested in quality independent media.

This is not a peculiarly New Zealand phenomenon and elsewhere through the Western English speaking world similar issues of corporate control and the slide of the media into irrelevance and bias are occurring.

For instance in Australia Jim Parker in a post titled the business of anger recently made these comments:

A perennial tension in journalism arises from balancing the professional requirement to accurately inform the public and the commercial one to actively engage them.

The destruction of media business models, where classified advertising subsidised across a Chinese wall the quality journalism that attracted the eyeballs, has gradually swung that balance from the professional to the commercial imperatives.

Of course, every journalist wants their work to be seen, shared and remarked on. After all, there are plenty of people on the web and elsewhere writing worthy but dull tomes that bury the lead. (And not all of them are tenured academics).

But in the brutal supply-demand economics of new digital media, where an ever growing surplus of content competes for an ever shrinking quota of attention, the only strategy (garage band style) is to turn up the volume….and bugger the standards.

His conclusion appears to be as relevant in Aotearoa as it is in Australia:

The media wants conflict for its own sake. And it doesn’t just want polite and civil disagreement. It wants desk-thumping, spittle-spraying, shoe-chucking tantrums – whether it be on talkback radio or Q&A. The issues in dispute don’t much matter. It’s anger, fury, hatred, and blind incoherent rage as a business model.

An example is what happened to the Herald this year.  Competent accomplished journalists were sacrificed for those able to generate the most noise and clicks.  Hosking is not only a star because he reflects a business view of the world but every time he says something stupid and invokes a social media backlash the Herald’s bottom line is improved.  The twin imperatives of respecting the corporate view and engaging in click bait journalism is leading us into some pretty ugly places.

But we should also acknowledge that the Herald and its reporters sometimes achieve great good.  For instance this guest article by Jarrod Gilbert on how the Police were attempting to vet the results of his academic study and how he was then deemed to be unfit to conduct research was given prominence by the Herald.  BLiP gave it the treatment it deserved in this post.

The best summary of the year in media was this comment by Kathryn Ryan transcribed by Danyl Mclaughlan.

Politically there’s a complete policy vacuum. Some of the stuff we’re going to talk about today – pony-tail pulling, Colin Craig – frankly it’s just barely worthy of the public’s time. And yet what we’re seeing is a very effective management by the incumbent government of a new media environment. John Key rightly copped a fair bit of criticism for the embarrassing ridiculous situation he walked into on radio stations but if you look at it from a perfectly cynical point of view many of the listeners would be people who are completely disinterested in politics. And what they heard was something that made them laugh and a good guy who showed up and played along with the joke. So the loss of the centralised media and the scandal of the day means that being able to occupy a place in all different parts of the spectrum whatever it takes is not only necessary but very effective and that is very hard for an opposition to counter.

But all is not lost.  As said by Danyl Mclaughlan:

At least the left enjoys full-spectrum dominance of twitter. When the day that pitching hysterical tantrums on social media becomes the key to political power, no one will stop us.

To finish this post I thought that I should repeat David Cunliffe’s recent speech to parliament summarising the damage the independent media has suffered.