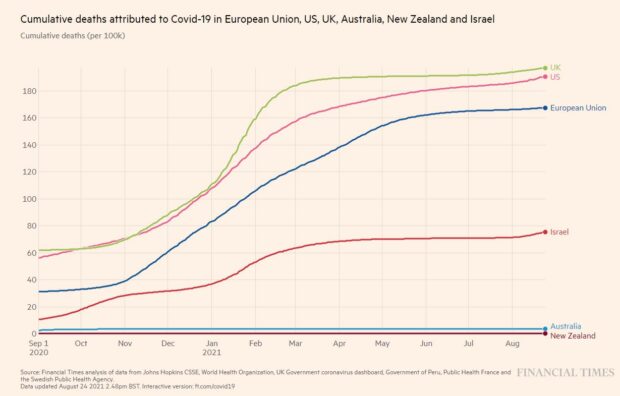 Right now we are being inundated with bad Covid takes, particularly from the United Kingdom.

Earlier in the week the Herald joined them all together into one story with the headline “Covid 19 coronavirus Delta outbreak: ‘Fortress NZ strategy crumbling’ – World reacts to latest lockdown move“.

It is difficult to understand how wrong the article could be.  It did not include responses from throughout the world, five of the six responses were from the United Kingdom who, <enable sarc> has handled Covid so well <disable sarc>.  The sixth, from Nick Perry at AP News was factual.

Of the remaining five commentators they included a Telegraph markets reporter, the BBC, head of research at the Adam Smith Institute, a showbiz reporter at the Daily Mail and Nigel Fucking Farage. Give me strength.

Like National some of the comments focussed on the vaccine roll out.  Not shouldering our way to the front of the queue to get extra vaccines at a time the rest of the world was going through a pandemic was clearly in their view a failure of leadership.

And I do not know how many times I have to say this but vaccination is not a silver bullet.

Just have a look at vaccination rates but then look at current death rates, or for that purpose total death rates.

Here is the vaccination table. 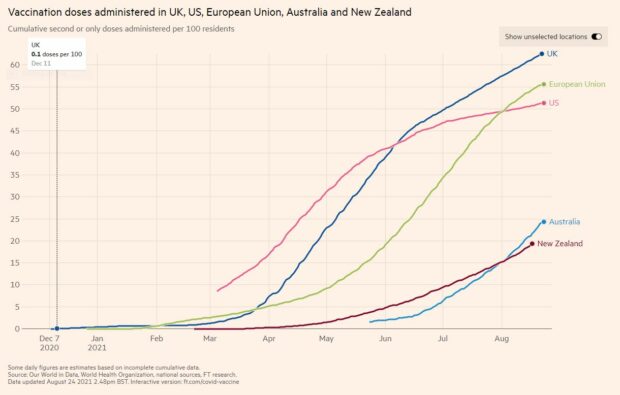 Here are deaths over time. 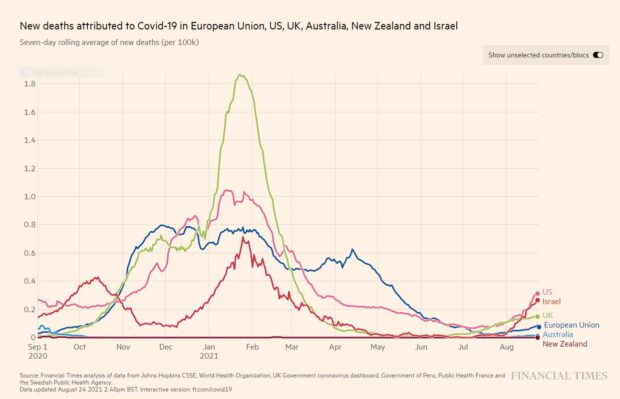 And here are the cumulative deaths.

Tell me which country do you want to live in?

Yesterday Scott Morrison chose to wade in and say similar things.  From Derek Cheng at the Herald:

Australian Prime Minister Scott Morrison says it is “absurd” for regions – including New Zealand – to chase elimination forever in a Delta world.

He was commenting on some Australia states and territories that have said they will continue to pursue elimination and keep their borders closed to NSW.

“Any state and territory that thinks that somehow they can protect themselves from Covid with the Delta strain forever, that’s just absurd,” Morrison told the 9 News Breakfast show today.

“New Zealand can’t do that. They were following an elimination strategy. They’re in lockdown.”

Morrison likened staying on the elimination path to living in a cave.

“Covid is a new different world. We need to get out there and live in it. We can’t stay in the cave, and we can get out of it safely,” he said.

Judith Collins has also floated the 70% figure.  When asked the number of deaths that would be acceptable she was less forthcoming.  The horrendous death rates from Covid in countries with right wing leaders is not a coincidence.  It is a feature caused by indifference.

And further research suggests that opening up at this proportion would be catastrophic.  From Paul Karp at the Guardian:

Ending lockdowns and other public health restrictions once 80% of the adult population is vaccinated could result in 25,000 deaths in total and 270,000 cases of long Covid, new modelling warns.

The work by researchers at three leading Australian universities predicts more than 10 times as many deaths as the Doherty Institute modelling that underpins the national four-phase roadmap. That plan was adopted by national cabinet in July but is subject to different interpretations by state and territory leaders.

The Doherty modelling looked at the number of deaths in the first 180 days of reopening at the 70% and 80% thresholds that lead to phase B and C – when lockdowns would be “less likely” and then “highly targeted”.

The latest research models total cumulative deaths over a longer time frame during phase D of the national plan – when no restrictions remain.

Dr Zoë Hyde, an epidemiologist and co-author from the University of Western Australia, warned the new modelling – which is yet to be peer-reviewed – showed it was “simply too dangerous to treat Covid-19 like the flu” and that Australia should reach higher vaccination rates before opening up.

Hyde and co-authors Prof Quentin Grafton of the Australian National University and Prof Tom Kompas of the University of Melbourne, both economists, called for a 90% vaccination rate among all Australians, including children, and a 95% rate for vulnerable populations, including elderly people and Indigenous Australians.

The criticisms about the vaccination rates are annoying and frankly miss the mark.  Firstly New Zealand did not push the emergency button and authorise the urgent use of what were then untested vaccines because we did not have to.  There were other nations where rapid vaccination rates were a matter of life and death.

It is the end point not the current standing that is important.

And even if we were at the same levels of the US or the UK it would not have stopped the current outbreak.

And the comment about our strategy is wrong.  Firstly it is more about early and decisive responses that then allow us to live relatively free lives and for most of the past year we have lived without significant restrictions and without a horrendous death rate.

A mysterious socialist hermit kingdom?  With a booming economy and for the most part freedoms that the rest of the world can only aspire to I don’t think so.  Elimination is the only reasonable strategy.  Fingers crossed that the Government can pull it off again even though the world is dealing with a tricky deadly mutation caused in part because other countries did not try and do the same as Aotearoa New Zealand.