A quick heads up on the progress of this global multi-billion dollar infrastructure project that China is pushing ahead with. Here is one part of it:

It’s one of the great engineering achievements in history…

At 48 miles long, the Panama Canal cuts through a narrow strip of land in Central America. It links up the Atlantic and Pacific oceans, allowing ships to pass through the landmass instead of sailing around a whole continent.

It’s worth the price.

There’s only one other route between the Atlantic and Pacific oceans: a 7,872-mile journey around the tip of South America. This trip can take weeks and cost hundreds of thousands of dollars in fuel.

The U.S. built the Panama Canal in the early 1900s. At a cost of $9 billion in today’s dollars, it was the most expensive construction project in U.S. history at the time.

So when other countries (including Germany and Japan) tried to build a second canal in nearby Nicaragua, the U.S. wouldn’t have it. A second canal, just 500 miles away, would dilute its value.

In 1912, the U.S. military even occupied Nicaragua to make sure there would be no Nicaraguan canal. And there never was.

But that’s all about to change…

The Chinese are preparing to build a Nicaraguan Canal. Like the Panama Canal, it will be a shortcut for ships to pass through Central America.

If all goes to plan, China will finish its canal in about 10 years.

And here’s the thing…

China’s Nicaraguan Canal is just a small piece of a much larger strategy of building strategic infrastructure to bypass U.S. control. 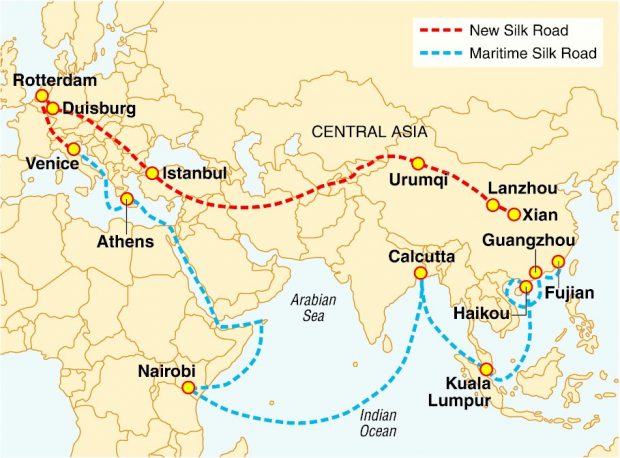 The Telegraph of India has the above graphic to show part of the new planned “Silk Road” which already comprises the longest railway service in the world (Yiwu in China to Madrid Spain).

You’ll notice that the maritime part of the route through the narrrow Straits of Malacca is the only practical way that China can connect with India, Africa and the energy rich states of the Gulf.

During a super power confrontation a simple naval blockade of the area targetting oil tankers heading to China or Chinese exports heading west would close down China’s economy ASAP.

Which partially explains why China has been busy building strategic military installations in the middle of the South China Sea. And why the US plans to block that development every step of the way, institute a TPP which leaves China out in the cold, and is determined to remain the unopposed naval power in the area.