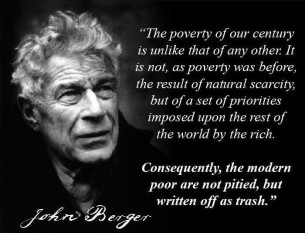 The video featured at The Standard on Saturday which showed Fox News abusing poor people was shocking. Will we see the same thing happening here? Well, the local MSM does love putting the boot into beneficiaries on behalf of National Ltd™, and there’s certainly dedicated reportage concerning “welfare cheats”. Plus there is the abuse of opposition MPs, trouble-some academics, scientists presenting inconvenient truths, and whistle-blowers.

Just two years ago, leading lights in the neo-liberal cult were denying the existence of poverty in New Zealand. In the semi-public havens of the rich, it was the messengers who were being abused for rattling the neo-liberal cognitive dissonance with pesky facts and sympathetic portrayals of actual poor people.

In 2013, Matthew Hooton and the New Zealand Iniative’s (aka Business Roundtable) Executive Director, Oliver Hartwich, insisted poverty in New Zealand is all a “lot of nonsense”. Hooton’s denial and his comment about the poorest living a better life than Henry VIII was made during an interview with Hartwich.  The denial was made in response to a question suggesting that it isn’t politics that is the problem as much as it is the greed and self-interest of the rich. Hooton’s response to the question was to first of all wonder where on Earth that question came from before saying . . .

. . . Brian Bruce’s absurd so-called documentary [Inside Child Poverty] that is a much worse scandal than Team New Zealand – [spluttering] – the so called gap between rich and poor in this society is far less than in a socialist society in terms of the actual experience of life that people can have. The standard of living of the poorest New Zealander is superior to that of Henry the Eighth in feudal England. You know, I think this is a whole lot of nonsense to tell you the truth. This is one of the most successful societies in the history of the world. The poorest New Zealanders have iphones that they can connect to the whole intellectual achievement human kind. You know, and the gap between rich and poor is not accelerating. The gap between the rich and poor is relatively stable and also social mobility is greater than in any time in the history of the world. I think its all nonsense, to answer your question . . .

Hartwich completely agreed and also pulled out the “social mobility” distraction neo-liberals love to use but which relies on the protect-the-rich maxim that massive income gaps are an unavoidable force of nature.

You can watch Hooton’s comment and Hartwich’s agreement starting at 49:20 in the video below. Although excruciating to watch, the whole video does expose parts of the thinking which can lead people to lock themselves in the ultimately barren neo-liberal mental prison of belief. Topics and themes include “smashing” baby-boomers who are “the worst generation ever”, why the term “neo-liberal” is a misnomer, and why socialists are responsible for both the global financial crisis AND the local housing crisis. Although mentioning that having Maori seats in Parliament is “an oddity”, Hartwich is wise enough to avoid making any other further comments about Maori generally because he has not been a local long enough. There’s also a few lols for those with a graveyard sense of humour. Hartwich suggests, for example, that one way to ease the housing crisis is to have a local tax. Perhaps he hadn’t heard of rates despite having been in the country for 18 months. Hooton, of course, is full of it. He tries to brush over his breaching of the Broadcasting Code by making a joke of it and continuing his abuse of David Cunliffe. Creepy John and National Ltd™ also receive a verbal thumping. His disparagement of the local MSM, complete with an imitation of a journalist, is bizarre considering his admission that he never does any research before turning up on TV or radio. Hooton’s claim to be a specialist in reading polls is worth giggle because he had previously told Hartwich and the audience that New Zealand is heading for that neo-liberal nightmare – a Greens/Labour government. Oh, if only . . .