For a range of reasons I’ve not been able to write the range of considered, nuanced posts that this topic deserves i.e. about the problems with the proposed BDMRR Bill changes to sex on birth certificates and how it impacts on women* and trans women. Part of that is the hostile environment that self-ID debate is taking place within (content warning for misogyny and violence in that link).

Ahead of the BDMRR Bill submissions closing tomorrow (Tuesday), I had a quick read through of some of the relevant documentation this morning, and now I’m really fucked off. The Department of Internal Affairs FAQ page attached to the Bill  barely even mentions women, and there appears to be zero attempt by the government to explain what the issues are so women can consider them and be part of the political process. As with Stats NZ consultation on sex and gender, the Working Group for reducing barriers to changing registered sex set up to advise the Minister for Internal Affairs included no women’s groups.

So this is a fast written post that tries to just lay out the issues ahead of the submissions deadline closing tomorrow.

If you want to skip straight to writing a submission, there is a template on the Speak Up For Women page, or you can use the government page here. Submissions are public, and you should probably make it clear you are a NZ citizen or resident because it’s possible perceptions of international submissions may impact on the process. You can see submissions already made here.

A brief outline of the problems with sex self-ID

How this might impact on women, a few explanatory examples

Obviously but apparently needs saying, not all trans women are sexual predators (any more than men generally), and there are good reasons to be careful in discussing this in regards to trans women’s safety. However unless women can point out the problems without being called bigots, it becomes very hard to explain what the issues are. Gender critical feminists are usually willing to talk about this alongside the rights of trans women, but are often pushed into a defensive then offensive corner by gender identity activists.

Much of this debate is happening on social media where there is clear evidence of events like males saying they are trans women doing naked selfies in women’s refuges, or masturbating in women’s toilets and posting online. What happened at WiSpa in California is the classic example: a male person saying they are a trans woman exposes themselves in the women’s section of the spa, all hell breaks loose when women complain, GCFs are accused of being allied with fascists, and it turns out that the male/trans woman has a history of sexual offences and is now being charged over the WiSpa incident. Stop and think that through now: any male can say they are a trans woman in any women’s space, and women will be accused of being bigots if they challenge them. With self-ID, how are women to know if a male person is a trans woman or not? (and should that even matter?). It’s pretty clear that many on the left are willing to sacrifice women’s rights.

I’m not even going to link here because this stuff has been discussed by gender critical feminists for years now, and the left has either ignored it or actively abused the women raising the issues. Look it up if you are unaware of what is happening. I’m willing to provide examples and links in comments for anything I’ve said in this post, in the context of considered and thoughtful debate.

The point here is isn’t to demonise trans women. Most trans women just want to get on with their lives. The issue is about how society can ensure good, fair and safe lives for women and trans women alike. Most women and people generally support trans rights. Many people also on the face of it support self-ID. This appears to be because most people still think that trans women are post-op transsexuals and think of Georgina Beyer. But once they are asked about self-ID and it is explained what that means (that any male person can declare themselves to be female), support for self-ID changes. This from YouGov polling in the UK, 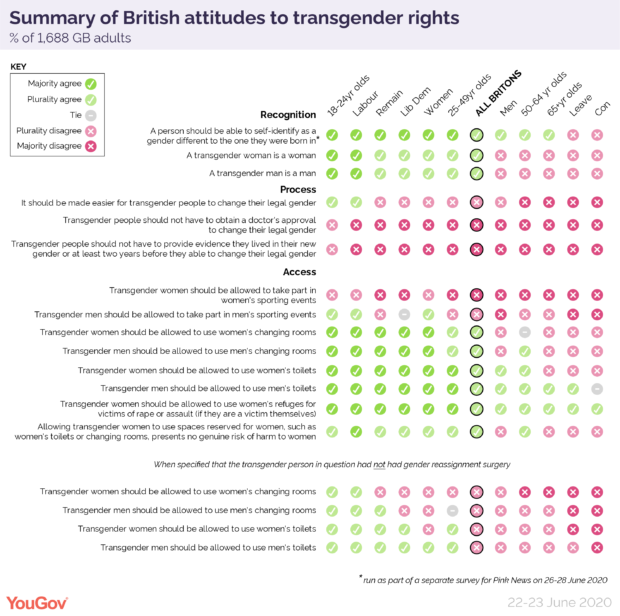 This doesn’t mean that trans people shouldn’t have rights. They should. Obviously trans people still face many barriers and prejudices in society and this should be actively addressed. Likewise, society should be enabling women to talk fully, frankly and openly about the issues that self-ID raises, because there is a conflict of rights and we have to sort that out.

Will the BDMRR Bill affect any of this? I think probably, because the change to self-ID isn’t simply an administrative issue. But I don’t really know what the impact will be in New Zealand, because both Labour and the Greens have taken the position that there is no conflict of rights, and so New Zealand women haven’t had a good opportunity to look at the issues and debate them. There’s been a dearth of coverage in the MSM as well.

The DIA FAQ page had one thing to say about women,

How will you protect women’s rights to sex segregated spaces if self-identification is introduced?

The sex printed on a birth certificate does not determine someone’s legal sex and any associated rights, and there is no legal provision for definitively determining sex in New Zealand legislation. A self-identification process doesn’t change the protections for sex segregated spaces.

People have been able to change the sex on their birth certificate since the Births, Deaths, Marriages and Relationships Registration Act 1995 was first enacted, and to self-identify gender on passports since 2012, and we haven’t seen any evidence of this being abused.

From this statement it is that it’s unclear if women have a legal right to sex segregated spaces based on biological sex at birth. One the one hand, they’re saying there is no legal definition of sex in NZ law, and on the other they’re saying that self-ID doesn’t change existing protections for sex segregated spaces. What they don’t do is clarify how women’s rights would be impacted. I think it is highly like that New Zealand will follow in the UK’s footsteps and women will have to fight to retain single sex spaces that are female only (i.e. that exclude trans women).

For this reason, I encourage people to submit on the Bill and oppose changes until a full political debate can be had about the social, political and legislative changes involved.

My own position is that trans rights would be relatively straight forward were women’s rights being considered alongside, but until that happens women have the right to push back against processes that put us and our well-being at risk.

The Speak Up For Women submission template page.

*In this post I refer to biological sex using the terms female/male and woman/man. When referring to gender identity I use trans woman/trans man. If you want to to comment under this post, please make it clear what you mean when using any of those words.