The view from the back of the National class…. 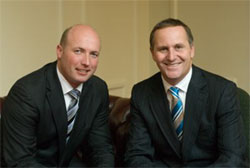 Last night’s debate on the Youth Minimum Wage Bill was (as noted earlier) a triumph for progressive politics and for young people. It was not such a triumph for David Bennett, who apparently is National’s MP for Hamilton East. His speech (mp3 – 2MB) during the debate takes incoherence to hitherto unknown heights. Most of the highlights are in the first couple of minutes so take a listen. To summarise:

– The bill is the work of communist dinosaurs (Tyrannosaurus Marx?)
– We live in a hierarchical society and this needs to be protected.
– There is a difference between people who ‘sit at the front and the back’ (Rosa Parks, anyone?)
– We have the highest rates of youth unemployment and Maori unemployment (since when? both are significantly lower than under National in the 90s)
– National is not proposing a maximum wage bill (phew, I say)
– Young people do not want to be paid well

In Mr Bennett’s delirious defence of hierarchy he notes that there is hierachy in Parliament and this is a good thing. Presumably then he will be comfortable with getting less money than Lockwood Smith. I mean it’s only fair, Lockwood has been there since 1987.

David also rants that there is hierarchy in who gets to ask questions in Parliament. Am I sensing some frustration here? Judging by this contribution Mr Bennett will be “sitting at the back” for a long time to come.

6 comments on “The view from the back of the National class…. ”