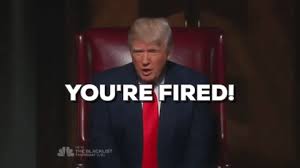 Unbelievable.  After ten days in the position it appears that Anthony Scaramucci has been fired from his white house job as communications director.

US President Donald Trump has sacked his communications director Anthony Scaramucci, just 10 days into his role.

The sacking – just days after Scaramucci unloaded a crude verbal tirade against other senior members of the president’s senior staff – plunged the White House into further crisis.

“Mr Kelly made clear to members of the White House staff at a meeting Monday morning that he is in charge,” the Times reported.

It was not clear whether Mr Scaramucci would remain as part of the administration in a different role.

The claim has not been confirmed by Trump twitter yet.  Hold all bets …