Twelve months of living with Covid

A year ago the World Health Organisation declared that the coronavirus outbreak constituted a public health emergency of international concern, WHO’s highest level of alarm.  How much has changed since then.

Before then reports were coming out of Wuhan China about the appearance of a novel virus that had caused some concern.  From the Nature website on January 20, 2020:

The world is racing to learn more about the outbreak of a new viral infection that was first detected in Wuhan, China, last month and is causing increasing alarm around the world.

As Nature went to press, officials in China had confirmed more than 4,500 cases of the virus, which causes a respiratory illness, and some 100 deaths. Around 50 cases had also been confirmed in other countries, in Asia, the United States and Europe.

Researchers fear similarities to the 2002–03 epidemic of severe acute respiratory syndrome (SARS), which emerged in southern China and killed 774 people in 37 countries. Both are members of a large virus family, called coronaviruses, that also includes viruses responsible for the common cold.

China has taken unprecedented action to try to halt the outbreak — including putting Wuhan and nearby cities on ‘lockdown’, restricting travel in and out of the cities. For now, the World Health Organization (WHO) has held off declaring a public-health emergency of international concern — the agency’s highest level of alarm — after a meeting of officials last week, but that could change.

The danger posed by the virus was underestimated at the time:

High rates of pneumonia among the first people infected had many researchers worried that the Wuhan virus was especially pernicious. Those concerns have receded slightly, as more mild cases have turned up. With some 100 deaths in more than 4,500 reported cases, the virus does not seem to be as deadly as SARS — which killed around 10% of the people it infected. But “It’s too early to be sanguine about the severity”, says Neil Ferguson, a mathematical epidemiologist at Imperial College London.

Given what happened subsequently the early estimates were optimistic.  And by March it was clear that the world was in a unique situation, not seen since the Spanish Flu in 1919.

China’s response was impressive.  It locked down cities, built new hospitals in a matter of weeks and strictly enforced the rules.

By March the alarm bells were ringing.  On March 10 WHO Director General Dr Ghebreyesus said this:

In the past two weeks, the number of cases of COVID-19 outside China has increased 13-fold, and the number of affected countries has tripled.

Thousands more are fighting for their lives in hospitals.

We have therefore made the assessment that COVID-19 can be characterized as a pandemic.

Pandemic is not a word to use lightly or carelessly. It is a word that, if misused, can cause unreasonable fear, or unjustified acceptance that the fight is over, leading to unnecessary suffering and death.

And we have never before seen a pandemic that can be controlled, at the same time.

WHO has been in full response mode since we were notified of the first cases.

And we have called every day for countries to take urgent and aggressive action.

We have rung the alarm bell loud and clear.

Meanwhile in America nothing happened.  The then President of the United States appeared to be incapable of dealing with the problem rationally.  Dan Obeidallah at CNBC wondered if he should be charged:

Trump knew Americans were relying on him to provide information to keep themselves and their families safe from the deadly virus. But still, he knowingly lied to the public about the risk of Covid-19. The most glaring example was one we learned about in September when the journalist Bob Woodward released audio tapes of his conversation last Feb. 7 with Trump. In that call, Trump told Woodward point blank that Covid-19 “is deadly stuff,” adding that it’s five times “more deadly” than “even your strenuous flus.”

Yet, weeks later, on Feb. 26 — with a nation desperate for information on this quickly spreading virus — Trump stood up in the White House, looked into the camera and lied to the public, saying, “I mean, view this the same as the flu.” This was days before the first American death from the virus was reported.

From there, Trump served up a buffet of lies about the risks of Covid-19, from repeatedly comparing it to the flu to a jaw-dropping one during his July 4 address to the nation in which he misled Americans with the false claim that “99 percent” of the cases were “totally harmless.”

How many of the over 400,000 Americans who died on Trump’s watch would still be alive if Trump had not intentionally misled the public about the deadly virus — likely because he believed it helped him politically?

Trump varied alarmingly between claiming it was all China’s and the WHO’s fault to there was nothing to worry about.  The deranged grouping that is the Republican Party base believed every lie and falsehood that he spun and thought that social distancing and the wearing of masks were part of the Communist takeover manifesto, not sensible policies designed to save lives.

Other nations ruled by alpha males also fared badly.  Italy was the first European nation to struggle, the UK, Brazil and Russia saw rates spike and an indifference to the disease has seen cases and deaths go up and up and up.

New Zealand’s approach was different.  We had the benefit of a small amount of time to see what was happening overseas.  And our status as a collection of islands away from transport hubs certainly helped.

And as reported by Henry Cooke in Stuff the possibilities back in March were pretty terrifying.

New research suggests up to 80,000 Kiwis could die from coronavirus without strict measures such as the country-wide lockdown.

It also shows that the lockdown may have to last far longer than a month to keep the strain on the healthcare system manageable.

But one of the paper’s authors said New Zealand’s speed at adopting a lockdown could mean we “stamp out” the disease much faster.

The modelling from the University of Auckland’s Te Pūnaha Matatini was provided to the Government before it made its lockdown decision, and builds on research overseas that has informed governments around the world in instituting dramatic lockdowns. On Sunday, initial modelling suggested as many as 60,000 Kiwis could die if stringent measures weren’t implemented.

Assuming 20 “seed cases” and a transmission rate of 2.5 the model looks at what would happen if no attempts were made to stop the spread of the disease.

It finds roughly that within 400 days roughly 89 per cent of the population would get infected, far exceeding the capability of our hospital system to cope and causing up to 80,000 deaths.

The research models that New Zealand’s hospital could deal with about 40,000 cases – so if more than 4 million people had the disease it would be vastly exceeded.

Much like the Imperial College paper which this research builds upon, the authors find that individual measures like closing schools and universities would not be sufficient to prevent large casualty rates.

Only a full mix of suppression strategies – population-wide social distancing with a lockdown and the closure of almost all businesses and schools – could keep the case numbers down enough for the healthcare system to cope, with a mortality rate of just 0.0004 per cent: About 20 people.

However the cases would spike the moment these measures were lifted, unless a vaccine had been developed in the meantime.

It is history that the Government chose to follow the scientific advice without compromise.  The team of five million dutifully fell in behind and New Zealand has, so far, not seen the spike in cases that other nations have.

The world is now getting to the vaccine stage and the US and the UK are scrambling to get as much as they can.  But this is no silver bullet cure.

As I said earlier in a highly connected word we are all in this together.  Rich nations getting the jump on the supply of vaccines will not help.  The disease will still sear its way through poorer nations and until the world’s population reaches herd immunity levels no one is safe.  This could take years.  Until then I cannot see any alternative other than to keep our borders closed, at least to the nations that have community transmission.

It is also a sign of failure.  Now that it is clear that some of the advanced nations’ approaches have failed they are relying on vaccines to get them out of precarious situations.  And crossing their fingers that further mutations will not render the existing vaccines obsolete.

The European Union has struggled.  Having such wide open boundaries and a variety of responses makes it almost impossible to eradicate let alone contain.  But you can see the differences in approaches and results that meant that Germany and Denmark contained the spread much better than

But looking back I think we can all agree that the decision to go hard and go early was the correct one.  And that eradication rather than management of the virus was the preferable option.

One final comment.  The nations that failed mixed up a slew of anti scientific propaganda with concern that their economies would be hurt.  One year on I believe we can safely say that the economy and community health are inseparable and related and we cannot have one without the other. 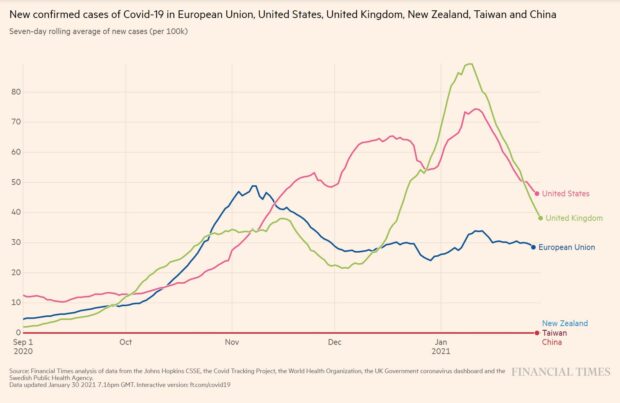 21 comments on “Twelve months of living with Covid ”