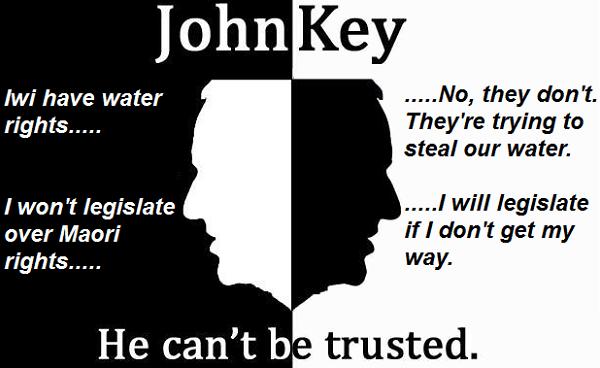 John Key really is the master of being whomever his audience wants to believe he is.

For years, he talks positively about Maori water rights and interests to Maori. But, when an opportunity comes to split the Maori and Pakeha opposition to asset sales, he’s in Pakeha ears telling them that the ‘Maaris’ are trying to claim they own the water to make some quick cash.

Iwi say that what they want is recognition of rights and interests, but Key has consistently called what they are seeking ‘ownership’. And that’s the difference,anyway? You tell me where the difference is between a right to use water to the exclusion of others (and, lease that right to others) and ownership of that water. Key uses the different words for the different audiences.

It’s spineless, deceitful and opportunistic… and, by god, he’s good at it.