We’ve talked a lot about the negative effects of unemployment on the unemployed and their communities (depression, crime, family breakup, poor health, poor educational outcomes for children etc) but there’s another group that benefits from fewer people being on benefits – people with jobs.

Check out the graph. At the end of the 1990s, there was one person on the unemployment benefit for every 12 people with a job. Labour’s full employment policies improved that ratio to the point where last year there were 94 people working for each person getting the dole. That freed up a hell of a lot of tax money for things like health, education, Kiwisaver, and the Cullen Fund. 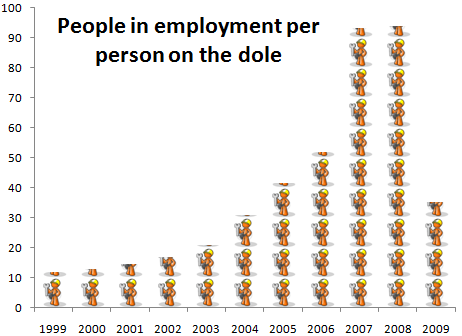 MSD and Stats
Over the last year, the ratio has worsened dramatically. Now, every 35 workers is paying for one person on the dole. Carrying that extra burden means we have to borrow more and increases the likelihood of savage cuts to public services by National.

Some will say that we should cut benefits. That’s obviously stupid. Apart from the issue of how you expect destitute people to survive without resorting to crime, the fact that just a year ago only 1% of the workforce was getting the dole proves that this isn’t an issue of bludgers choosing to be on the dole. These people want to work. The solution to the problem is to get them jobs.

National’s performance on employment has been a spectacular case of over-promise/under-deliver. The jobs summit was a complete failure – its flagship idea, the cycleway, is now a national laughingstock that hasn’t delivered the 3700 jobs promised. ReStart was a sick joke. No-one, business or union, wanted the 9-day fortnight. And the jobs supposedly created by the youth jobs package are actually jobs that would have come into existence anyway, with employers favouring young employees to get the government subsidies. Not that it has helped – youth unemployment is now over 25%.

Sadly, I can’t see it changing any time soon. Our Social Development minister seems to think her job is to appear on magazine and newspaper covers looking clueless and out of her depth, while her boss is too busy getting to the next photo op to check up on her.