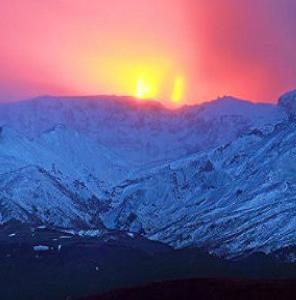 The eruption of the volcano under Eyjafjallajokull glacier in Iceland is an example of what we can expect more of due to climate change and actually has a cooling effect, slightly counteracting climate change.

Volcanic eruptions have caused temporary cooling in the past – the ‘year without a summer‘, 1816, resulted from the sulfates thrown into the stratosphere by the Tambora eruption and the Pinatubo eruption in 1991 caused that year to be about 0.5 degrees cooler in the Northern Hemisphere. But these are just temporary effects and, anyway, this eruption is nowhere near the scale of those eruptions, too small for its sulfur dioxide output to have an effect. Eyjafjallajokull is emitting only 3,000 tons a day and compared to 17 million tons from Pinatubo.

Volcanic eruptions also emit carbon dioxide. Not generally enough to offset the cooling effect of the sulfur dioxide but, funnily enough, Eyjafjallajokull is having a far bigger effect on climate change (as least temporarily) by stopping carbon dioxide emissions.

With 60% of Europe’s flights grounded 200,000 tons of carbon dioxide emissions per day are being avoided – that’s a touch more than New Zealand’s daily greenhouse gas output. (btw, our net emissions fell about 10% in 2008 – thanks recession!)

So, Eyjafjallajokull is having a small positive impact on climate change. Interestingly, it is thought that that eruptions like this may become more frequent due to climate change.

Eyjafjallajokull is under a glacier. The modeling suggests that climate change will cause more volcanic eruptions as ice melts. Why? Because these are massive redistributions of weight. Removing the enormous weight of a glacier or ice cap makes the land beneath it rise. If the ice is on top of a volcano, that can increase stresses on the top of the magma chamber, making an eruption more likely.

Volcanologists say that the Eyjafjallajokull glacier (which means ‘island mountain glacier, if you’re wondering) is too light and has melted too little so far to have triggered this eruption but we can look forward to more volcanic eruptions in Iceland and other frigid and geologically active regions in the decades to come.

This is one of the few major natural negative feedbacks from climate change, where rising temperatures cause a reaction with a cooling effect. Unfortunately, its not likely to be anything like enough to make up for the positive feedback – warming effect – as rising temperature melt ice caps and glaciers, and the sun’s energy strikes less reflective surfaces like bare land and sea. And compared to human emissions, volcanoes’ effects are pretty minor.

Ironically, even as our greenhouse emissions warm the globe, melting ice, promoting volcanoes to release more cooling sulfur dioxide, we are emitting less of the stuff. Sulfur dioxide is a major ingredient in smog, we emit it from burning low quality oil and coal. During the second half of the twentieth century, the smog clouds over the industrialised world canceled out about half of the warming effect of our greenhouse emissions. But now we’re cleaning up, the smog is lessening, and there’s less to counteract the warming.

90 comments on “Volcanoes and climate change ”