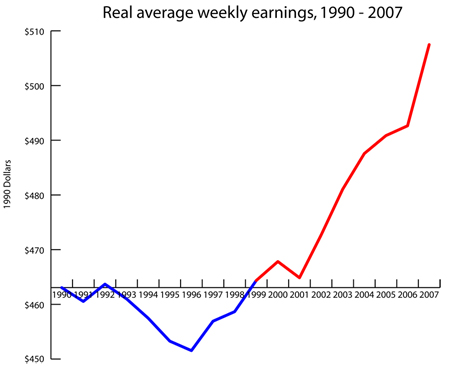 As The Standard first reported on April 1 and Radio New Zealand picked up today, Treasury figures show that the wage gap between Australia and New Zealand increased 50% under National in the 1990s and has decreased moderately under Labour since then.

We know that under the left-wing governments since 1999 the minimum wage has been increased by $5 an hour; something like 40% in real terms (I don’t have the number on me). We know that workers’ collective bargaining power was strengthened by the introduction of the ERA and a full employment policy. We know that New Zealand grew faster on average than Australia during this period and wages rose as a % of NZ GDP. We know that incomes at every level have risen under these policies. At the same time, we know that Australia’s right-wing government was weakening work rights.

If we were asked to construct a hypothesis on the relative change in wages between Australia and NZ given these facts, what would that hypothesis be? Surely, we would expect the wage gap to have opened under National and at least stopped growing under Labour (remember, once you’re behind, you need to grow much faster just to stop the gap growing). And that is exactly what the Treasury figures show.

[the CTU has a list of policies to help close the wage gap further. I’ll write more on that later]

36 comments on “Wage gap decreasing thanks to pro-worker policies ”