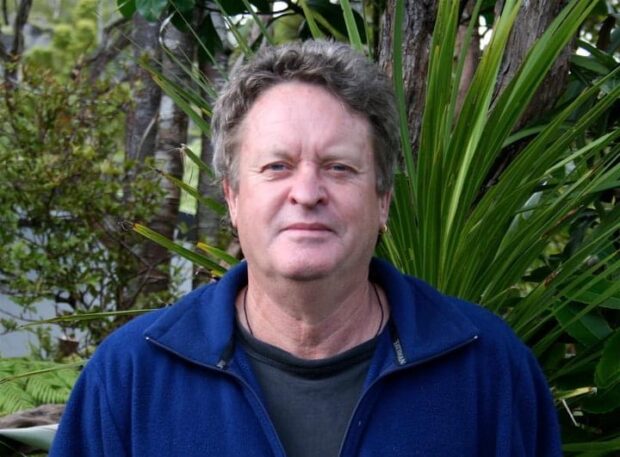 I’d thought I’d take a moment to celebrate the life of John Edgar, who passed away a few days ago.

Some will remember John primarily as an artist. He developed painstakingly accurate cutting techniques for fitting parallel pieces of stone and glass into tight geometric forms.

His typical line-description was “the stones are the bones of the land”, and would work these dense and heavy rocks into states approaching massed frozen liquid.

His artistic biography is summarised in this BrickBay link.

His intense reverence for the land and particularly our land is pretty clear from one characteristic summary of his:

These slices of the land are revelations of how intimately the environment meshes. How seamless are the interrelationships of earth and sky, land and sea, heaven and earth, black and white? The convergence of the two into one.”

He was awarded an Officer of the Order of Merit for New Zealand for his services to art. His art and his activism emerged from a single integrated energy.

John was a powerful environmentalist for the Waitakere Ranges in Auckland’s west. And it’s his activism that makes him particularly relevant to us here.

Back in the mid-1970s, many of west Auckland’s progressive leaders who are now in their 70s and 80s began their activist paths with a protest to put a landfill into the Bethell’s Beach lagoon. It was the first big environmental fight since Manapouri that the media had been really effectviely harnessed to push back hard on a stupid local council. You can check out the blow-by-blow shenanigans and fun that led them to winning here.

They evolved over time and intervened when chunks of forest that were contiguous with the main forest were threatened with being carved off and killed for residential development. They were convinced that this particular forest – not huge by any standards – had something precious to it. They won many battles. A major one was their support behind the Waitakere Ranges Heritage Act. This Act was a hard-fought piece of work and involved many who had started as activists now being elected onto the post-1989 Waitakere City Council. This local bill was passed with full opposition from National and with the support of one independent Member of Parliament, Taito Philip Field. It wasn’t the strongest piece of protective legislation, but while the rest of Auckland has spread out over the land from the Bombay Hills to Whangaparaoa, the forested west has remained the forested west.

Seeking and gaining the approval of WRPS and of John in particular was high on the list of any aspiring political candidate whether local, regional or central. It was a lot of votes, with a lot of activist passion behind them.

John was Chair of WRPS for 22 years and led many successful fights to protect that forest.

There are now over forty activist groups throughout the Waitakeres protecting one thing and another, but WRPS were the major one since the 1970s and have been a model for them all since. John was a lot of fun, a real creative original, a fierce and uncompromising spirit, and an icon of Auckland’s west.

The statement from the Waitakere Ranges Protection Society reads:

John dedicated his life to protecting the environment and especially his beloved Waitakere Ranges with its significant heritage and ecological values.

It’s not unreasonable to call this man a fully realised being: he gave his life-energy to expressing his love for this land and his support for all those who would work to sustain this land. I would wish that state as a model to aspire to.

Fortunately we will be able to see his art works for millennia to come as they, like his activism, will last for generations to come. Make sure you touch them and let them tell you their story, because they are all from John.