Will you vote for higher levies?

If National wins the election, it will privatise the Work Account of ACC (and maybe other ‘profitable’ accounts). We know that this may have negative effects on coverage for workers but the problems go further taking out the Work Account may compromise the whole ACC system. 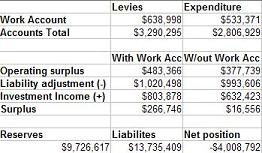 Every year, ACC needs to run a surplus so that it can add to its reserves to close the gap between reserves and liabilities. Much like the Cullen Fund is a way of saving up to fund future superannuation payments with present tax, ACC’s reserves is a way of saving up now for higher claims from an aging population in coming years. If it does not, it will mean higher levies in coming years. As you can see, removing the Work Account slashes that surplus to nearly nothing.

Insurance companies would make $200 million in profit, most of which goes overseas, and the rest of us will be left with a financially criplled ACC, which will need higher levies to survive or will collapse.

Voting National means profits to Aussie insurers, which we will pay for in worse work coverage and higher levies

20 comments on “Will you vote for higher levies?”